Lake George played a pivotal role during the early history of this country and has many historic sites, monuments, and markers which tell this history. Home to Native Americans for 10,000 years, the lake became a bloody arena during the clashes between the French and English empires, was the scene of military action as American patriots wrestled the 13 colonies from the British, and later was a commercial "highway" where various watercraft plied its pristine waters.

During colonial times, Lake George served a critical role as the lake itself was a crucial part of the natural navigation system running south to north. Control this important corridor, and you controlled the entire region.

You can learn more about the fascinating history of Lake George and see these sites for yourself through this self-guided Colonial Wars Walking Tour.

Jump to: Setting the Stage For War | Important Dates & Conflicts | Details On The Tour | Each Stop On the Walking Tour

The Iroquois and the Algonquin Native Americans bitterly contested control of the Lake George area. In 1609, French explorer Samuel de Champlain, along with his Algonquin, Huron, and Montagnais allies, defeated a superior force of Iroquois in the Champlain Valley. This battle cemented opposing alliances in future conflicts, wherein the Algonquin supported the French and the Iroquois the English.

In 1689, the first of four major colonial wars between the French and English began. There was little military action from these wars in the Lake George area, and all three wars ended without either side gaining a conclusive victory. These three conflicts were King William's War (1689 to 1697), Queen Anne's War (1702 to 1713), and King George's War (1744 to 1748).

By 1754, British and Colonial authorities became concerned over French forts being constructed along the Ohio River Valley frontier. Following two military encounters in southwest Pennsylvania, a final confrontation between the French and English in North America became inevitable.

The British strategy in 1755, under the leadership of General Braddock, was for the British and their colonial allies, called provincials, to take Forts Duquesne, Niagara, St. Frederic, and Beausejour (Nova Scotia). This war began in North America as the French & Indian War (1754-1763) and in Europe as the Seven Years' War (1756-1763).

The British plan started off badly. General Braddock was defeated and killed in 1755 near Fort Duquesne and the provincials never got to Niagara, becoming bogged down at Oswego. Soon, however, the British gained ground.

Lieutenant Colonel Robert Monckton forced thousands of Acadians in present-day Nova Scotia from their homes. And, General William Johnson with provinicial troops defeated the French in the Battle of Lake George. With this beginning, Lake George was the scene of momentous warfare during both the French and Indian War and the American Revolution (1775 to 1783).

What to Expect From the Walking Tour & Each Stop 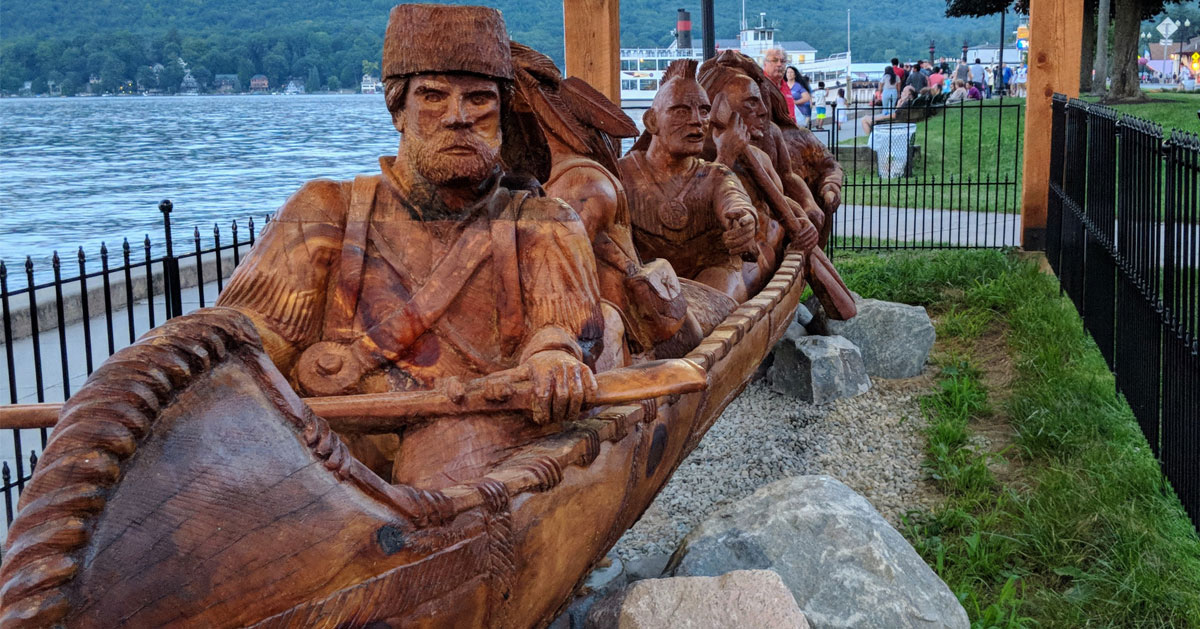 The Colonial Wars in Lake George Walking Tour is 3.3 miles long and takes approximately two hours to complete. Because this is self-guided tour, you can opt to begin at any point along the loop, you can visit each stop over the course of a few days, and you can even use a vehicle if you prefer.

Please maintain the integrity of the historical and natural sites. Restrooms are located along the route.

Below, find links to further information on each stop: