This bronze and granite historic monument is a memorial to four unknown soldiers buried here. It is believed they fell on September 8, 1755 on the Bloody Morning Scout (the first part of the Battle of Lake George) led by Colonel Ephraim Williams and King Hendrick against the French and Indians under Baron Dieskau. 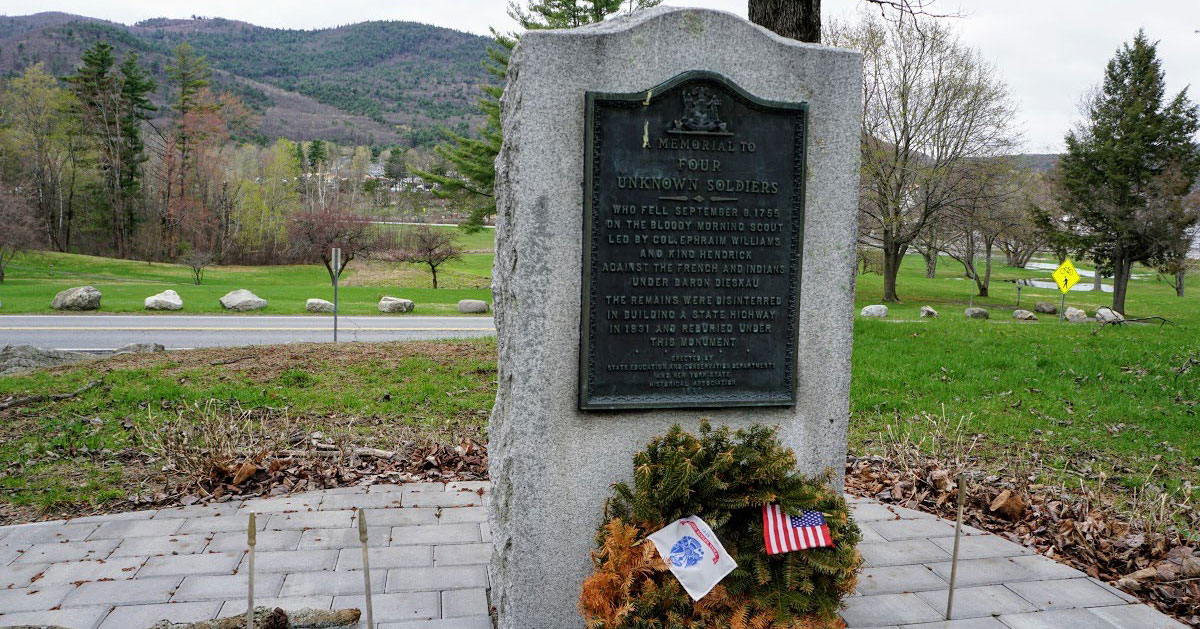 The remains were discovered in 1931 by workmen while excavating for a culvert near the Colonel Ephraim Williams Monument on Route 9, located south of Lake George. These bones were later identified by Dr. Arthur C. Parker of the Rochester Museum of Art and Science as "all the skulls are of Europeans." The study also determined the men died of head wounds.

Thus, the remains could be from the September 8, 1755 Bloody Morning Scout. In this battle 1,000 provincials and 200 Native Americans were attacked while they marched south along the Old Military Road. The provincials were led by Colonel Williams of Deerfield, Massachusetts, and the Native Americans by the 63-year-old Mohawk chief called King Hendrick. Both were killed in this ambush.

The remains were disinterred in Building A State Highway in 1931 and reburied under this monument erected by state education and conservation departments and the New York State Historical Association in 1935.

Though the Bloody Morning Scout was a victory for the French and their Native American allies, the Battle of Lake George was eventually won by General William Johnson and his forces as the French and Native Americans, under Baron de Dieskau, failed to take advantage of their initial success.

As a footnote, Colonel William's will created funds for the building of Williams College in Massachusetts.