In 2014, The Lake George Steamboat Company, home to the historic Minne-Ha-Ha steam paddle wheeler, commissioned talented sculptor Alice Manzi to create a statue of Minnehaha as depicted in Henry Wadsworth Longfellow’s 1855 poem, ‘The Song of Hiawatha.’ 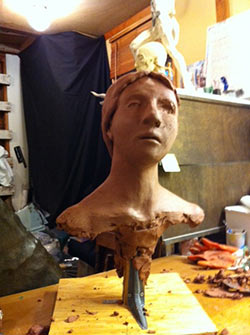 The artist, Alice Manzi, worked closely with Mr. Bill Dow, owner of the Lake George Steamboat Company, to carefully choose the right design, pose and costume in order for the sculpture to capture the spirit of Longfellow’s poem and Minnehaha’s longing for her beloved husband Hiawatha’s return.

Minnehaha faces the viewer, but is turned gazing out over the horizon, searching for her husband. Her hand is placed as if she was pulling a lock of hair from her face and her bow rests in her left side. The costume she wears resembles that of the Plains Indians, depicted in Longfellow’s poem. 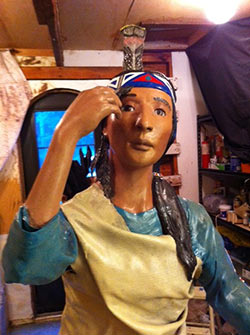 Manzi has an extensive background in sculpture and currently owns Manzi Sculpture Studios, a full service sculpture facility and the only one of its kind in Upstate New York.

Manzi began her artistic journey at the age of 10 and continued to study extensively in both New York and Italy. Her work has been exhibited widely, and is included in many permanent collections of both individuals and organizations throughout the United States. Manzi has also served on both the Russell Sage and Skidmore Adjunct Faculties for a number of years. She has won several awards including two New York State Council on the Arts awards as well as the NY Foundation for the Arts and CETA. 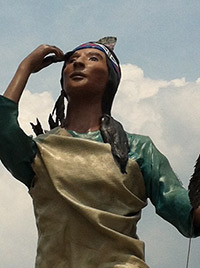 Manzi created the sculpture of Minnehaha with the style of Forrest Lanfear in mind. Lanfear is a Lake George sculptor famous for creating many life-sized figures located around Lake George and surrounding regions. He was an artist who worked directly in fiberglass when sculpting, a challenging task for a classically trained sculptor.

You can find Minnehaha front and center at the Steamboat Landing in Lake George right in front of the famous Minne-Ha-Ha steam paddle wheeler. She maintains her watch during the spring, summer and fall, earning a well-deserved rest in a climate-controlled setting each winter.

To learn more about what Manzi is currently up to, check out her blog!

You can find more of Alice Manzi’s work locally at the following locations: