Producer of On the Lake, whose pilot episode featuring Lake George appeared in Spring of 2011. 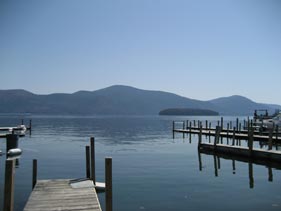 1. In your mind, what makes Lake George stand out from other places you've visited?

Lake George is one of the most visually stunning settings on the planet from which to launch a show.

While there are other beautiful places to visit, Lake George has not only spectacular vistas but a depth of history that few other destinations can compete with. It has been the scene of many events that have played a significant part in the shaping of nations and the fortunes of empires.

From its earliest exploration it has had just over 400 years of activity, resulting in today being one of the world's premier fresh water resorts. It is truly a gem that needs to be not only revered, but protected.

2. Do you have a favorite Lake George island or section of the lake?

I have always enjoyed traveling on all parts of the lake, but when I take visitors up through the narrows into Red Rock Bay and Paradise Bay, they seem to really appreciate the fact that there still are these little pristine nooks where civilization has not yet encroached. Those would be my favorite places.

3. Through working on this series, have you learned anything about Lake George that you didn't know before?

Working on the series has opened me up to world of things that I didn't know about the Lake before. It has introduced me to people and organizations that do great work to protect and preserve the Lake such as the Lake George Association and others. I have met gracious homeowners who were kind enough to let a crew of strangers have free reign of their homes and answer many personal questions about those homes.

The most surprising thing I learned is that Lake George is considered one of the most haunted places on earth, in fact some people who are "sensitive" to paranormal activity have gone as far to say it is some kind of portal for spirits.

I'm not a believer, but while filming in one of the dungeon areas in Fort William Henry, our cameras starting switching from color mode to black and white and then back again without explanation. Once we left the area, the equipment worked perfectly. Also while shooting photos of a totally blank white wall in a "sensitive" area, we were surprised to find that the last photo contained the distinct outline of a spectral shape not visible in any of our other photos. Boo!

4. What is something a lot of people don't know about the area?

Most people are not aware of the importance of the lake during the Victorian era when it was the summer playground of the rich and famous.

The folks who inhabited "Millionaire's Row" on the east side of the lake were the movers and shakers of their day and where involved in many cutting edge inventions and activities of their time. They invested in such things as Lindbergh's first cross Atlantic flight to Paris and the Autogiro, the precursor to the modern helicopter.

These were a fascinating collection of people who contributed great stories and philanthropy to the history of the area.

5. What are some of your personal places to visit and things to do in Lake George?

I keep my boat docked at Boats by George on Sandy Bay. I like to grab a cooler (a big one) and some friends and tour the lake. It is something I never grow tired of.

Usually I end up having lunch either at Blue Water Manor in Basin Bay or the Algonquin in Huddle Bay. I also like to be on the lake at night, sometimes docking in Bolton [Landing] and walking into town for dinner and then racing down to catch the fireworks in the village if it's a Thursday.

What I consider a really a special day are the ones where I chose to travel up to the Northern end of the lake towards Ticonderoga. Sometimes I find my thoughts drifting back hundreds of years to those brave souls who traveled its length in canoes wondering if their next campsite…would be their last.

6. What happens in the process of turning a pilot into a series?

The process of turning a pilot into a series is varied depending on your strategy. Sometimes you can pitch an idea without a finished product; that is not what we elected to do with On the Lake. We wanted to produce an entire show which we will use to entice one of several agents that have shown an interest in the project to represent it and in addition we will also be pitching directly to networks where we have contacts.

One of the ways to ignite the process is to demonstrate that there is an audience for the program. With sites like Youtube, there is opportunity to show some of the potential for a program and that is what we are striving to do with a series of video shorts that are representative of the program.

If we can develop a following prior to our initial pitch, that will give some credibility to the possibility of a successful series and the attraction of sponsors.

7. What does a typical day look like while working on On the Lake?

First I'd like to say that there is nothing typical in the film business.

On the Lake offered some unique challenges in that the weather played a dramatic part in what we could accomplish during any given day. If you recall last summer was not the greatest and we were forced to deal with 23 days of rain in July. That being the case we needed great weather for our outside shots as we wanted to show the lake in its best light, other grey days were left for shooting interviews and home interiors.

While nothing is typical, you do need to start early, be organized and always be prepared to shift gears when faced with shooting obstacles. It is important to have a back up plan. It costs around $5,000 dollars a day to put a team of professionals and equipment in the field, so you need to able to maximize your field shooting days.

On the Lake utilized 2 or more high-definition cameras, make-up, sound, direction, wardrobe etc. Some of the days we had split up, with teams shooting different locations. That's where as a producer you have to trust the people working for you to get the shots you need to complete your vision. I was fortunate in having a very competent, self-motivated team of professionals that I was very familiar with working on this pilot.

8. Where did you get the idea to have pirates as your "unique ambassadors?"

We wanted to highlight some of the businesses and activities available on and around the lake, but did not want to come off as a "magazine show." In addition we were looking for iconic characters types to be associated with the show. Being on the water, pirates seemed like a natural vehicle to accomplish those goals.

On the Lake utilizes a host format, but what makes us different is that the entire crew is also involved in the show as we weave a back-story based on the origin of the pirates and trying to control their contributions (or lack there of according to our host) throughout the program. We were fortunate to have cast four really enthusiastic guys who displayed great chemistry when performing together.

Honestly, I wasn't sure if the pirate thing was going to work or just look stupid until we started shooting. They looked great and everyone who came in contact with them was mesmerized by their personas and antics. The Sagamore hotel called and asked if they could have them back as a resort attraction as they were so popular with their patrons. We believe the pirates will be an entertaining addition to the program.

9. What are some of your ideas for the future of On the Lake?

Our goal is to launch a series where we can travel to spectacular lakes worldwide and offer the same insider look at those locations that we have on Lake George. There are countless lakes and many in the United States that would fit our requirements. We are looking at Lake Como in Italy among others outside of the country where there is a strong historical component to complement their stunning visuals. Lake George has enough material to supply and benefit from a follow-up program.

It would not break my heart to do a few more episodes from Lake George. We actually are going to spin off another series on lakeside ghost stories since we had much more content than we could use for the pilot.

10. What will we see in the pilot episode?

The pilot episode will feature tours of some terrific lake homes, a series of historical components ignited by those visits, interviews with folks who have had ghostly encounters, instruction from world class photographer Carl Heilman on how to take a great picture on the lake, stunning lake visuals from several perspectives including the air and the antics of our landlocked pirates who visit many high profile locations on Lake George and raise mayhem on set.

The program is a fast-paced tightly woven introduction to one of the most beautiful spots on the planet coupled with a humorous and entertaining back story centered around the origin of our band of nautical ruffians.

Go behind-the-scenes to learn more about On the Lake!