Today, we know of Americade as being one of the most popular annual events in Lake George, drawing more than 50,000 riders and passengers to the area for a week-long rally. It hasn't always been this way, though. In fact, when it was initially created, Americade took place more than 2,000 miles away from Lake George.

Before It Was "Americade" 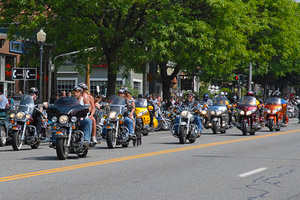 In 1971, Ruidoso, New Mexico became home to a new biker rally, called "Aspencade" in honor of a festival celebrating the aspen trees' changing colors. A decade later, a Lake George local named Bill Dutcher imagined how great it would be to have a motorcycle rally in the area where he lived.

Dutcher began the preliminary planning stages in 1981 and in 1983 completed an arrangement with Aspencade founder Til Thompson to move that rally to Lake George, under the condition that it would be called Aspencade East for at least three years.

The first Aspencade East was a success, as were the rallies in 1984 and 1985. Roaring Brook Ranch served as the social and demo headquarters, and Cool Insuring Arena (formerly the Glens Falls Civic Center) played host to the TourExpo tradeshow.

What's In a Name? 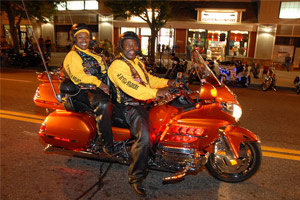 In 1985, Dutcher's "Aspencade East" naming agreement expired, which meant that it was time for the rally founder to consider re-naming the event. As Dutcher tells it, his wife suggested "Americade" at a Fourth of July party when she was struck by feelings of patriotism. Initially, Dutcher brushed her suggestion aside, but the more he thought about it, the more it made sense.

When it was first started in 1971, Aspencade was a regional or niche event, and it kept that identity when it first moved to the Northeast. Recently, though, Dutcher had begun to realize that people from all over the country riding all different makes and sizes of motorcycles were flocking to the rally. "Americade" reflected the fact that the rally had grown into a national-level event, and so the new name was solidified in 1986. 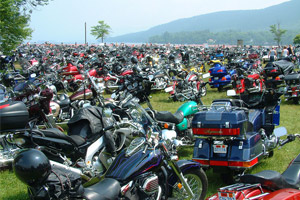 Along with the name change came a location change - Americade was moved to its current home in Lake George Village, which is more centrally located near the scenic Adirondack Park, the beautiful lake, and all the attractions, activities, and accommodations that attract so many visitors.

Each year, the rally has continued to draw increasingly large crowds, from 2,000 in 1983 to 10,000 in 1986, to more than 50,000. The event now has its official headquarters at the Fort William Henry Resort and Americade's impressive tradeshow is located right down at Million Dollar Beach. Now, more than ever, there are attractions for riders and non-riders alike, from tours through Vermont and other scenic destinations to whitewater rafting and hot air ballooning. Unlike some other large rallies, Americade has gained a reputation for being a family-friendly event. 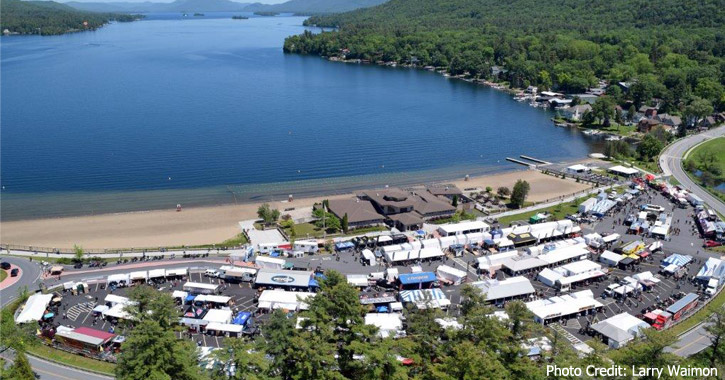 Today, Americade is proudly known as "the world's largest multi-brand motorcycle touring rally" drawing an estimated 100,000-200,000 visitor days each year. It truly is an event you have to see for yourself, whether as a rider or a spectator.

If you've never been, come out and see what you're missing! And if you have been, we hope to see you again this year.

« Return to the Americade Guide