Old meets new at Silver Bay YMCA! The 116-year-old family retreat recently celebrated the opening of its newest building, which features a dining hall, conference center, and lodging. But that’s not all! See how the YMCA is investing in the future of the region, from offering year-round jobs to keeping Lake George clean. 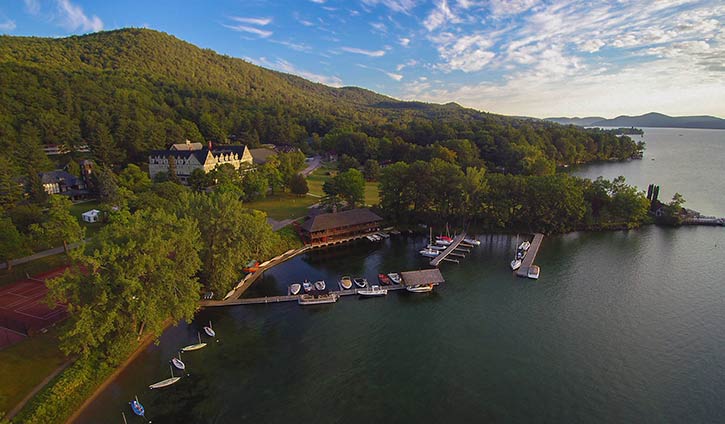 The new William Boyd Center was named after the former YMCA leader and great-grandfather of Virginia Rowan Smith, who currently serves as Silver Bay’s advisory board member for the Lake George Land Conservancy. Though the building’s dining hall has already opened, replacing the facility which was demolished last summer, its new conference center and 22 additional rooms are set to be completed by Labor Day.

“There’s a lot of excitement,” said the YMCA’s chief executive officer Steve Tamm to The Post-Star. “…It’s the biggest project we have had here probably since we started over 100 years ago.”

In fact, the project was a massive team effort by local artisans and more than 20 North County contractors. Though construction reportedly cost between $13 and $13.5 million, the entire project “has pumped more than $20 million into the area,” according to Tamm.

At 43,000 square feet, the William Boyd Center will soon hold between 400 and 500 guests, and already serves between 600 and 700 meals three times per day. The new building is located just beside the Silver Bay YMCA’s inn, which was constructed over a century ago — way back in 1899!

In addition to its dining and lodging, Tamm told The Post-Star the center will become “a more year-round facility” by offering visitors:

The Y is also planning for future generations of visitors, incorporating stormwater Best Management Practices (BMPs) in the project. According to The Post-Star, the stormwater BMPs utilized by contractors include a green roof system and permeable pavement, which both reduce runoff and filter pollutants. In another effort to avoid stormwater runoff, the YMCA worked with the Lake George Park Commission to design a constructed wetland. When completed, the wetland will be located near the edge of the lake.

Get out on the lake! Find fun water activities for your next trip »