Lake George is nicknamed the Queen of American Lakes for its impressive size and crystal clear waters, making it a prime example of the natural beauty found throughout New York State. In fact, the Lake George Region is set to become one of the main highlights on a proposed 750-mile state recreational trail! 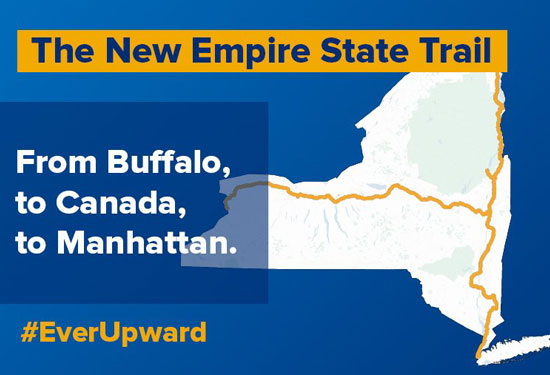 The 750-mile trail is officially named the Empire State Trail, and it was recently announced in Gov. Cuomo’s 2017 State of the State agenda. The trail will travel from Buffalo to Albany and Manhattan to Canada, crossing through the Lake George Region along the way.

The amount to build the trail is estimated at $200 million over three years. In addition to increasing accessibility, the trail is expected to help local communities economically by attracting hikers, bicyclists, and even cross-country skiers.

In order to construct this trail, two of New York State’s longest trailways, the Hudson River Valley Greenway and the Erie Canalway, will be connected. Both are incomplete at the moment, so the Empire State Trail project will fill in the gaps.

The Erie Canalway runs from Buffalo to Albany along the historic Erie Canal for about 360 miles. The Hudson River Valley Greenway spans over 260 miles from Manhattan to Lake George. The greenway is about 50% complete, and bicyclists currently have to use State Bike Route 9 to go from Lake Champlain to Canada.

Lake George will be a key part of the Empire State Trail’s north-south section. During the third phase of project development, the focus will be completing the Hudson River Valley Greenway between Lake George and Canada. Along the way, the trail will pass through communities, heritage areas, and historic sites, such as Fort Ticonderoga.

When the 750-mile Empire State Trail project is finished, it will be recognized as the longest multi-use trail in the U.S.

To help travelers find local attractions (such as Lake George), lodging accommodations, historic sites, and other destinations along the Empire State Trail, New York State will create a new website and mobile app.

Both the website and app will include a list of greenways and trails with hiking and difficulty descriptions. The mobile app will also feature a live tour map and allow users to see what’s nearby.

If everything goes according to plan, the Empire State Trail will be completed by 2020.