The King family has kept generations of families coming back to Lake George RV Park from all over the country through amazing on-site amenities, classic customer service, and word of mouth to new guests. 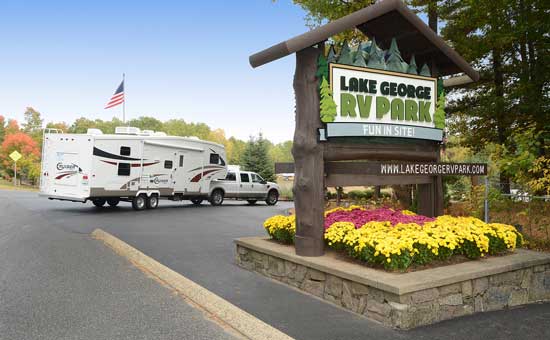 The King family has always been a group of avid RV campers. Vic King, who created the park, did not love having his RV covered in mud and dust from traveling on dirt roads, and longed for a more clean camping experience. When he suggested a travel-trailer park back in 1965, most people were less than enthusiastic about the idea.

“People thought my father was a dreamer because it had never been done before,” Dave King, President and CEO of the park said in a statement. But the park opened in 1966 and has been successful ever since.

The younger King started working at the park when he was just about seven years old. Dave told us, “When you work in a family business you’re always working.” He started in a more official capacity in high school, and then became General Manager in 1988.

Each season sees a greater demand for reservations, with customers booking up their stay far in advance of opening day, the first Friday in May. Much of the success of the park can be owed to simple customer service – listening to the customers’ needs.

“My father was known for making daily rounds in the park and guests looked forward to talking to him and sharing their stories,” King said in a statement. “We continue that legacy today, listening to our guests and putting a premium on the camping experience.” Word of mouth has also brought in guests year after year.

And the guests do come – from all over. King has seen visitors from every state in the union, including guests from Hawaii who transported their vehicle on a boat to the mainland, before driving across the country to New York State.

Some guests even come from abroad. “The Germans and the Dutch are particularly interested in touring our country in an RV,” King said.

In the years since the recession, King told us the vast majority of guests now come from within a 400-mile radius of the park, which does encompass some large population centers.

About 20% of visitors come from Canada. Other “hot spots” where a lot of guests travel from include central and eastern Massachusetts, northern New Jersey, northern Pennsylvania, and parts of Connecticut.

According to King, about 60% of customers are those who have visited the park before, with families often passing down the tradition of RV camping to their children. “We’re serving third and fourth generations of families,” King said proudly.

The 120-acre park offers 400 RV campsites and fully equipped vacation rentals in addition to 30 and 50 amp hookups, water, sanitary, cable TV, WiFi at each campsite, and an extensive list of on-site amenities.

The park is actually known for its extensive amenities, including professional entertainment at the French Mountain Playhouse on the property, an indoor heated pool, a trolley to local destinations, and a two-acre off-leash dog park, to name a few.

“We try to create facilities at a level not seen before,” King told us. When the playhouse was constructed in 1988, no other campgrounds had professional entertainment in the parks. The trolley service is also fairly unusual for an RV park, and that service started in 1972.

These “signature services” as King calls them are a huge passion of his, and what sets the park apart from competitors. Not only do they have fantastic amenities that have been successful for decades, but Lake George RV Park also tries to add something new each season – just in the past couple of weeks they converted three tennis courts to six pickleball courts, and are already hearing rave reviews from guests.

King and his family are looking forward to continuing the legacy his father has laid out before him, with no plans of ever selling the park.

“The trend in the industry is to go corporate,” King said in a statement. “We are one of a declining number of family-owned and operated resorts in the country, and we will continue to be here through the years.”

If you’re interested in camping and lodging at Lake George RV Park, reservations can be made by calling 518.792.3775, or visiting lakegeorgervpark.com.