Last year, sensor platforms were dispersed around Lake George, collecting vitally important data for maintaining and preserving the lake. This year, the project is expanding even more. 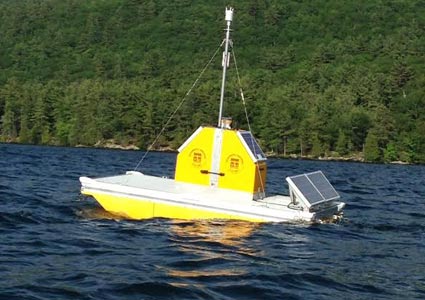 Twenty-one sensor platforms will be deployed in Lake George this year. Four types of platforms will collect substantial amounts of data from the lake, its tributaries, and its wetlands, sending the information to supercomputers for investigation.

The Jefferson Project behind this incredible undertaking is a three-way collaboration between Rensselaer Polytechnic Institute, IBM Research, and the Fund for Lake George. About 60 people are involved – and not just biologists, but computer scientists and others as well, making for a diverse group.

In February, Gov. Andrew Cuomo announced a $500,000 grant for the project through the Higher Education Capital Matching Grant Program to help complete the $2 million sensory network. As the name implies, the grant requires a three-to-one match, so the partners have pledged $1.5 million between them.

This is the first public grant awarded to the Jefferson Project, which has been in the works since June of 2013. Twenty platforms were deployed in 2015, primarily in the southern basin and the Narrows, so this year they are placing them in and around the northern part of the lake.

“We’ll try to complete that picture. We have about half the picture now,” Jefferson Project Director Rick Relyea told The Post Star.

The sensors help scientists understand all the nuances of the lake so they’re able to track trends and predict what will happen in the future – which will of course go a long way towards preserving “The Queen of American Lakes.”

Now, scientists have the opportunity to collect and examine information on these disruptive species, along with water circulation, run-off into the lake, and even the weather. The brilliant minds behind this project can use data to conduct experiments and manipulate different variables to find out why something is happening.

“With all those things happening at the same time, it’s hard to say what is causing changes in the lake,” Relyea told The Post Star. “In experiments, we can separate those things.”

Eventually those involved hope to see the technology commercialized, so scientists can tackle problems in other waterways – even oceans. With so many water crises and fresh water challenges happening around the world, when we look at the big picture, projects like the Jefferson Project could be monumental in saving our planet.

The Jefferson Project is named for Thomas Jefferson’s 1791 quote about Lake George, in which he called it, “without comparison, the most beautiful water I ever saw.”