It’s not exactly the winter wonderland we’re typically used to during December in Upstate New York, but when the nasty weather hits, Lake George will be prepared!

It’s widely known that road salt poses a major threat to the health and stability of the lake, so surrounding towns have armed themselves with new technologies that can clear snow and ice without having an extraordinarily negative impact on the watershed. 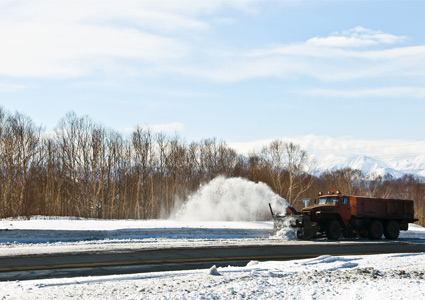 Back in October, we wrote about “live edge” plows that the Village of Lake George and Town of Hague will be trying out this winter. Because the plows use spring-loaded plates and can more efficiently adjust to unevenness in the road, they can reduce road salt usage by as much as 40%!

The Town of Lake George is trying out a new technology of its own this winter: the Dickey-john Control Point System. Two of the town’s three primary plows have been outfitted with these black boxes that were purchased by the Lake George Association and Warren County Soil & Water Conservation District. The systems allow drivers to have control over exactly how much salt is dispensed from the truck and the rate at which it is dispensed.

Additionally, the town’s plows have new temperature sensors that can determine the temperature of roadways (which are generally higher than air temperatures) and prevent over-application of salt.

Who knows when snow will finally start falling, but when it does, these new technologies will help ensure that both drivers and the lake stay as safe as possible.