This weekend, a fleet of vintage race boats will cruise into Lake George, and participants and spectators alike will instantly be transported back eight decades to a time when the “Mayor” of Bolton Landing and his thirteen-year-old boat dominated the competition. 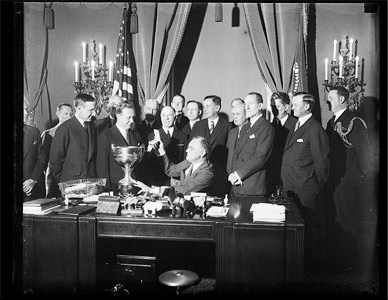 The Lake George Gold Cup Festival, to be held September 17-20 in Bolton Landing, will be a recreation of what many argue was the most prestigious race in powerboating: The Gold Cup. Although the race dates back to the early 1900’s, some of its most significant years happened in the 1930’s.

From 1933-1935, one man won an unprecedented three consecutive Gold Cups, including two in his home waters of Lake George. That man was George Reis, pictured above receiving the President’s Regatta Cup from President Franklin D. Roosevelt in 1934.
Reis accomplished this feat in a boat named El Lagarto, “The Leaping Lizard of Lake George,” which made its Gold Cup debut in 1922 under the name Miss Mary II. Included in this weekend’s festivities is a tour of the Tumblehome Boatshop where El Lagarto is on display.
After his historic victories, Reis continued to be a popular figure in the region, serving as deputy sheriff of Warren County, acting on the Board of Directors of the Lake George Club, and participating in the Lake George Association.
Participants in Saturday’s re-enactment of the 1935 Gold Cup race will channel the spirit of Reis, who resided in Lake George until his death in 1962.
Sources: