Although “Queen of American Lakes” is an appropriate nickname for the beautiful Lake George, a more fitting one may soon be “Genius of American Lakes.” Using Big Data and analytics technology, scientists are transforming Lake George into one of the smartest lakes in the world, and their efforts could benefit bodies of fresh water all over the planet. 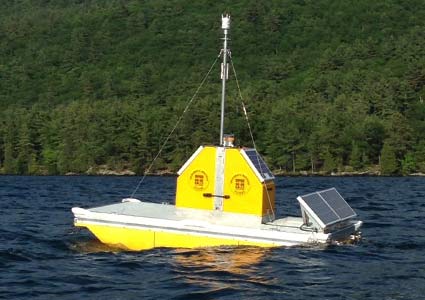 The research has been dubbed “The Jefferson Project” after Thomas Jefferson, an early admirer of Lake George, and it is a joint effort by Rensselaer Polytechnic Institute, IBM Research, and the FUND for Lake George to better understand the lake’s stressors and threats. The project started more than a year ago, and some early findings offer just a glimpse of the robust information that’s still to come.

Using dozens of sensors, scientists have discovered “the existence of an underwater ‘ghost wave’ which can be as high as nearly 100 feet running about 30 feet below the surface of the 32-mile long lake,” IBM said in a statement.
Scientists have also implemented and are working on fine-tuning a weather model to more accurately make two-day forecasts, a water run-off model to show how precipitation and snow melt flow into the lake, a salt model to assess the impact of road salt on the watershed, a circulation model to provide a clearer picture of the bottom of the lake, and a food web model to determine how human activities impact the lake’s natural ecosystem.
According to IBM, “Scientists anticipate that insights uncovered from the data collection and discovery stage of the project will not only help manage and protect one of America’s most famous lakes, but create a blueprint to preserve important lakes, rivers, and other bodies of fresh water around the globe.”
Harry Kolar of IBM Research wrote, “The end goal is to be able to run simulations to help predict how events such as heavy storms, road salt run-off, and introduction of new plant or animal species would likely affect the entire natural environment. It’s a holistic approach to ecosystem analysis and management.”
To learn more about The Jefferson Project, watch the video below or follow this link.
Sources: