Literally, sweet! What’s better than the scent of freshly made fudge wafting out of a confectionery store, or the enjoyment of a deliciously cool ice cream cone on a hot summer day? Kilwins and its popular confections will be opening in Lake George Village by mid-June, and located on Canada Street. The Kilwins chain has 100 stores nationwide, four in New York and now two locations in the area! 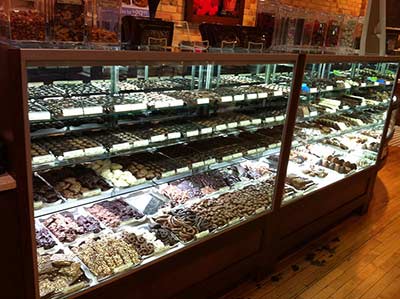 Kilwins is a full-line confectionery that sells ice cream, fudge and other delicious items fit to satisfy any sweet tooth! Bill Hoffman, who also owns Kilwins located on Broadway in Saratoga Springs and in Newport, Rhode Island has decided to bring the confectionery shop up to the Adirondacks. The Lake George location will be seasonal, closing around Columbus Day.

The new shop will help diversify the retail selection in the village. Mayor Blais feels that Kilwins will be positively received by the public. “The village has been trying to encourage retail stores of a great variety, particularly those that appeal to families. And certainly, Kilwins ice cream is extremely well-known and will appeal to the type of folks that the village caters to,” Blais told The Post Star.
It took Hoffman a long way to get where he is today. After working several years in a corporate setting, then as a yacht captain, he opened up his first Kilwins in Newport in 2009. He opened the Saratoga location a year and a half ago, when he and his wife moved here. Hoffman reported to The Post Star, “It’s a fun business, and the customers are always somewhat happy when they come into the store.”
If you have a sweet tooth and you’re in Lake George this summer, make sure you swing by Kilwins!
Sources:
The Post Star