Adirondack Winery is one local business making it big – with a new look! The winery re-introduced itself with a new logo – perfectly timed for the holiday season! After several months of preparations and decisions, the winery has released their new branding, and it’s one to take notice of!

On December 2, 2014 Adirondack Winery debuted their new look after nearly a year in the making. The winery’s former logo was launched in 2008, after it was the chosen winner of a student graphic design submission contest. However, after a few years passed, Co-Owner and President, Sasha Pardy, felt that the logo needed to better communicate the winery’s overall brand.

Why create a new logo? As the wine is now sold in more than 150 stores across Upstate New York, Adirondack Winery’s brand is seen throughout the state every day. On that note, the winery felt that their brand really needed to represent the “the beauty and relaxed feel of the Adirondacks everywhere it is seen, ” according to CEO and Wine-Maker Michael Pardy. 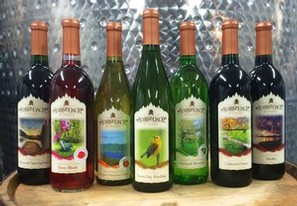 With this new branding, the winery has been able to take their brand to the next level, creating new wine labels and a new website. As 2015 comes around the corner, the winery will slowly transition in the new branding, including their paint colors and signs, Tasting Room, logo merchandise, brochures, and more!

According to Sasha Pardy, this was definitely a change for the better! “After months of blood, sweat and tears, we have launched a completely new look for Adirondack Winery, including a New Logo, New Wine Labels, and New Website! I feel our new look better represents the Adirondacks and our role in the Adirondacks, Lake George community.”

Is the new logo an improvement over the old?
Tell us what you like most about it!

Make sure to stop in to the Adirondack Winery on 285 Canada Street in Lake George this holiday season! And let us know – do YOU like the new logo?