I was a little skeptical about attending the Rachael Ray show; I have always had this thing about celebrities and the way they act once they “hit it big.” I think that sometimes people forget where they came from and I was afraid Rachael might have that very attitude. I am happy to report that I am BEYOND pleasantly surprised after attending Rachael Ray’s Annual Benefit Show; this celebrity chef is not only true to her roots but she acts as if she is just another face in the crowd.

Rachael Ray has helped LGHS raise over $150,000 for the Alumni Association/special programs and has helped raise awareness for animals and children in need with her “YUM-O” and “Nutrish” charities. 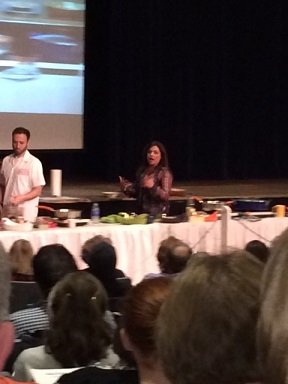 Walking into the auditorium immediately gave me a rush of excitement. As I looked around, I saw a mix of everything from young families to eager seniors waiting to hear Rachel’s secret cooking tips and have their books signed. I sat there, pen in hand, wondering what the show would entail.
I listened to those around me talk about Rachael’s husband, John, and his job as a lawyer, how much Rachael loves this local restaurant or that local grocery store, and how “off the cuff” she is every year. This was Rachael’s 12th appearance at LGHS for the Benefit Show and I was excited to see what all the hype was about. 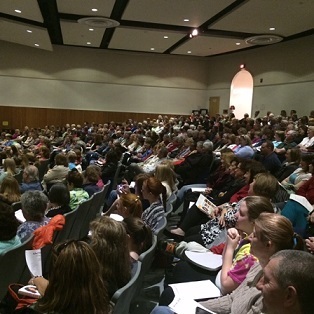 When Rachael entered the auditorium, she automatically gave me a good feeling; her charming, raspy voice and inviting tone made all in attendance feel like they were having a normal conversation with a friend. She was so inviting right off the bat, begging the audience to ask questions as she rolled up the sleeves of her flannel.
Rachael looked like an Adirondack girl and spoke like one too: down to earth, conversational, and funny. She started talking at first about her childhood in Lake George, not even mentioning a word about cooking. Rachael joked with her “Aunt Gloria” (a member of the Alumni Association) about the embarrassing picture she chose to show of the cooking star as a kid.
Rachael proudly spoke about the Lake George community essentially “raising” both her and her single mother. She told the audience that she had been working ever since she could have working papers, and she even teased that her mother “abused her” by making her work ahead of time. Having this work ethic at a young age is what Rachael believes has made her who she is today.
“Only in America can anyone become a Rachael Ray”, Rachael remarked. Rachael pushed herself to follow her passion and humble roots helped her grow into a beautiful, successful, VERY FAMOUS woman. This show was so personal and casual, not even a lot of it was about cooking! I did happen to snag 5 good tips from Ms. Ray that I have never heard before.
So, before raving more about how I found my new BFF, here are 5 things Rachael thinks you NEED to know about cooking:

1. ALWAYS buy big. For example: get the whole chicken not separated and pre-cut pieces. Buy an entire root vegetable not pre-sliced/packaged veggies. This will help you have more on hand-you can use EVERYTHING that you buy. (see tip 2)
2. Think before you throw away. The stems from root veggies are awesome for soup stocks or some sauces (pesto) and chicken bones are used for flavor too! Research how your food can be used to the fullest.
3. Put your citrus in the microwave to get more juice. Nuking your lemons for 20 seconds can get you almost double the juice!
4. Her mother always told her: your two best instruments in the kitchen are your hands. Don’t be afraid to get dirty! Rachael reached right into the bowl to stir at her show while her assistant “Cappy” made fun of her.
5. Anytime you make pasta, add the starchy water to your sauce! It gives your sauce more flavor and the pasta a better stick.

I loved the way Rachael talked about our home being her home too. She said she loves being from Lake George because “the family you choose is as important as the family you are born to…people come out every year to hear me talk about the same stuff…that’s the family you choose!”
The way she spoke was so genuine and touching that it made me want to ask her everything! It was as if she had the secret to success, the keys to have a happy and fulfilled life. While people asked her tips about cooking, I was thinking if it would be appropriate to ask her to join me for a beer. I wanted to just rack her brain the entire night. 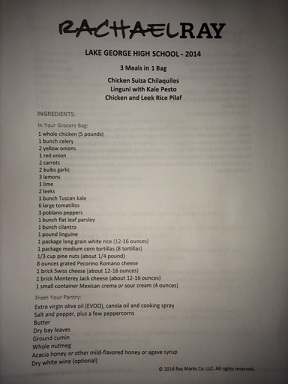 Never in a million years did I think I would love this boisterous and animated woman from the Food Network, but here I am already filling out a subscription for her magazine. I will leave you with my favorite thing Rachael said all evening which I believe could not be more true: “We should all value each other and everyday of our lives we love picking apples, watching the leaves change, sitting by the lake having a cold beer, and talking by the fire.”
A true Adirondack girl, an amazing chef, and a humanitarian, we are so proud that Rachael Ray calls Lake George home.
Want to find out about more fun events in the community? Check out LakeGeorge.com. Did you go to the show? Comment below to tell us about your favorite part!