I have been to a few charity golf tournaments in my life but the Double-H Ranch Charity Golf Classic, that took place on May 12 was easily the best tournament I have ever played in. From the second I arrived at the Sagamore Golf Club until I left the Conference Center at the Sagamore Resort I was treated with the best service I could ask for. It was a great time for a great cause with great summer-time weather. 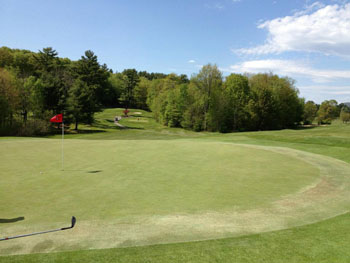 This is how my time at the tournament went:

Once I arrived at the course and registered with my co-workers, Scott Stevens and Jeremy Abel, the fun began right away (our fourth player couldn’t make it due to an emergency). Before the tournament started Blaine McCallister, a current pro on the PGA Champions Tour, put on a clinic with tips and jokes on the driving range. There was a delicious breakfast set up for us at the course as well.

We started on the seventh hole at 10:30 a.m. and the tournament was shamble style, which is best ball of four tee shots and then stroke play for each player until they have holed out. The course was in very good shape for having a wet week before the weekend and the weather was a perfect 70 degrees all day. First hole went well for it being rated the hardest hole on the course, an up hill, sharp dog-leg left, par four, 405 yards that has a green surrounded by deep bunkers. 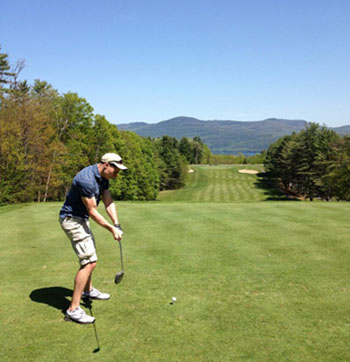 The next hole was when I had my shot-of-the-day: par 3, 175 yards long and up hill. I hit my 7-iron and placed it within three feet of the hole. I birdied it, Scott and Jeremy both made par. After that hole the round went steady and the pace of the other players went smoothly. At all the par 3’s there was prizes and mini competitions for golfers.

Bruce McCallister was on the 11th hole, a par 3 that is 145 yards and rated the easiest hole on the course, giving golfers tips and trying to help groups land on the green. He tried four times with our group landing two in the sand and 2 off the green to the left….I put two back-to-back shots on the right side green.

At the front and back nine turns, there were tents set up with complimentary turkey or roast beef sandwiches, veggie wraps, snacks and beverages. It was unbelievable service throughout the day; the staff was kind and helped out any way they could.
We finished our round with average scores: Jeremy – 120, Scott – 93, Me – 88 (It was the first time Jeremy ever played a big course). The round took only five hours and when we went back to the club house, Pies on Wheels was cooking fresh pizzas outside on their trailer.
After the golfing was over, everyone from the tournament left the golf course and went to the Sagamore Resort for the auction and dinner. Items included in the auctions were several flags from The Masters, autographed by pros like Tiger Woods and Seve Ballesteros. After the auction, a delicious 4-course dinner, made by a dozen local chefs, was served.
The dinner was one of the best meals I have ever had in my life, and once everyone was done filling their stomachs, we concluded the night with a trivia competition between each table.
This was a phenomenal time for everyone with great food and golf. And now I’m thinking maybe I should go for my pro card after placing two on the green at the 11th.