Plan Lake George Fun On LakeGeorge.com!
Find a Business Enter Giveaways Advertise
Home  »  Uncategorized  »  A Brief History of Postcards #ADK_TBT
Today on my desk I received yet another wonderful blast from the past: a set of postcards. Namely, “Historic Postcards of the Adirondacks” by Richard P. Nadeau. The collection consists of 8 postcards, all featuring paintings of various places within the Adirondack region.
Before I even begin to comment on these postcards, their relationship to the Adirondacks, or their implications on the past, let me write this disclaimer:
I am a member of the Millennial Generation: I have no money, yet buy Ralph Lauren every chance I get; I have no idea how to divide without a calculator, yet I have a Dual Bachelor’s of Science degree; I played baseball for 2 years and was horrible, yet I have 6 trophies from it; I send “selfies” before I go to bed because I’m afraid that if I went 8 hours straight without social recognition, I may spontaneously combust… you get the point.
So when I look at a postcard, I have no freakin’ clue what it really is. The concept just doesn’t apply to me. When is it socially acceptable to send a postcard? Who do you send it to? The only thing I really know about postcards is that they came into play somewhere between the end of the Jurassic Period and the premiere of the instant-classic MTV series “16 and Pregnant.”
So, in order to write this Throwback Thursday article, I had to do some research. I can proudly say I am now a postcard aficionado thanks to 2000 words on Wikipedia.
But let’s get to the point: the history of postcards. The first postcard featuring a picture was created in London in 1840 by the writer Theodore Hook. He created the postcard as a practical joke on the post office. Hilarious, I know. Well, what Teddy didn’t know was that 8 years later his idea would hit the United States… in the form of mail advertising. So basically we can all thank Theodore Hook for those flyers to JCPenney we get at the beginning of every week.
The first postcard with a printed image on one side was made at a French military camp in 1870, during the Franco-Prussian War. Apparently people thought this was a pretty good idea, and 2 years later they were being sent as souvenirs from various countries.
Generally, the “Golden Age” of postcards globally was between 1890 and 1920: the exact timeframe that “Historic Postcards of The Adirondacks” took its cards from.
You now know more than anyone should ever know about postcards. So let’s get to the good part: the actual Adirondack Postcards. I could simply just attach the pictures… but that’s no fun.
Instead, I’m going to give these postcards a 21st century twist and Foursquare the places they were sent from (remember that time I said I was a millennial?) Here we go: 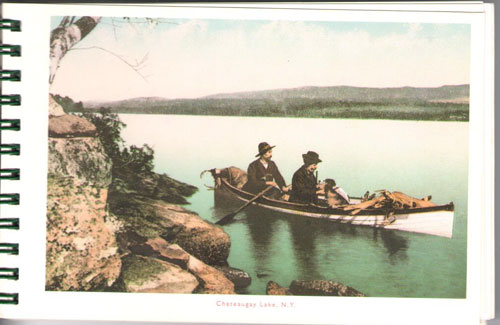 Looks like Chateguay Lake is trending! Today I am thankful for Ford F-150’s because they keep me from being these guys dressed in full suits, paddling a buck back home. 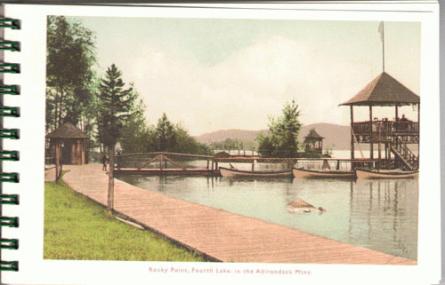 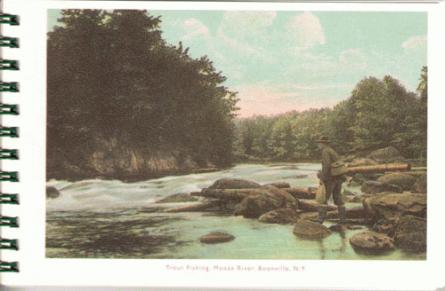 Paul Bunyan frequents Moose River. Word on the street is Davy Crockett has a mistress up in those parts.