Plan Lake George Fun On LakeGeorge.com!
Find a Business Enter Giveaways Advertise
Home  »  Uncategorized  »  Who Was George Owen Knapp?
Today I asked myself the question, “Who was George Owen Knapp?” Yes I know, it’s an odd question to ask, but I can assure you that it was provoked by something other than scrolling through a phone book looking for someone to prank call. 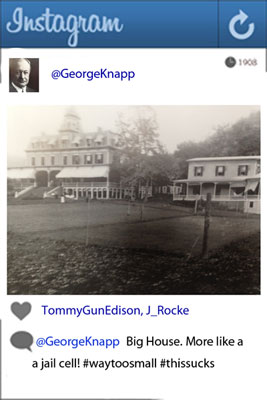 I first asked myself this question when I received his biography, A Splendid Secret by Benjamin Taylor, on my desk today while working. The book itself is oversized, clunky, and clearly has no intention of being stowed away in your handbag to be read when you get a few quick moments. No, the intention is pretty clear judging by the sizing; if you’re going to open this book, you’re planning on sitting there for awhile. It’s kind of like watching the sun set on Lake George in July.
So I looked through this book and the first thing I realized was that there weren’t a whole lot of words: my type of book. As I flipped through the pages of black and white landscapes, I thought to myself, “This dude would have been amazing at Instagram.” Seriously, this guy would have been getting 100 “likes” on every picture he posted on social media…without even writing a caption.
And once again I sat pondering, “Who was George Owen Knapp?” Besides a dude with a pretty killer scrapbook. Well, thankfully I work at a computer, so the answer was pretty easy to find in the Age of Google.
Mr. Knapp, like most individuals worthy of a biography about them, was a highly successful man: a tycoon, a philanthropist, a traveler, and most importantly, a Lake George frequenter. He even owned an estate on Lake George, which he lovingly named, “Shelving Rock”. Sounds pretty cool right?
The main building was named the “Big House.” Can you guess if it’s a mansion or not? Yeah, it is. The author actually refers to it as George’s “millionare pleasure dome.” It’s cool though; it only took up a measly 10,000 square feet of his 7000+ acres of property holdings along the Lake George shoreline. It was barely big enough to even dock his 81-foot yacht. Oh what a casual life good ole Georgey Boy led.
But the Knapp family eventually grew distant from Shelving Rock, and in 1941, the real estate was worth upwards of $4 million. However, the Knapp family wanted the estate to be preserved, and they opted to sell their properties to New York State for less than $200,000.
In honor of the age of social media, Lake George, and most importantly George Knapp, I would like to present everyone with some pictures that were taken from Knapp’s estate.
The twist is that these pictures will be presented by George Knapp through Instagram… or what I imagine he would write if he had an Instagram in 1917. 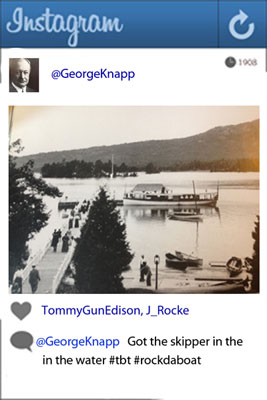 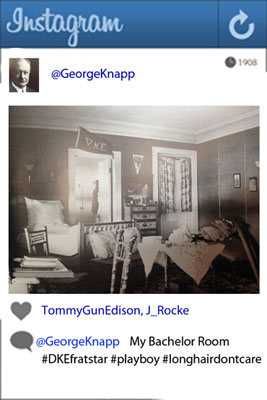 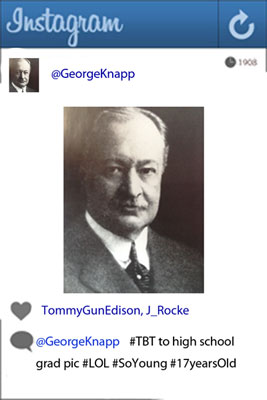 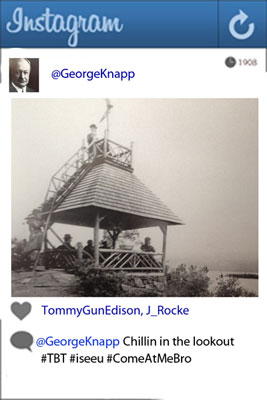