After retiring two of their vessels during the Great Depression, the Lake George Steamboat Company operated just one during World War II - the Mohican (II). However, post-World War II, the company entered what could be best described as a period of reconstruction. From 1950 through 2017, three steamboats would become a part of their fleet, and here are their stories.

Ticonderoga (II): In the Navy

As mentioned in Part 5 of this history series, Captain Wilbur Dow purchased the Lake George Steamboat Company in 1945 and aimed to rebuild it. His first action was to upgrade the company's current vessel, the Mohican (II), and then he decided it was time to add a second ship.

The Ticonderoga (II) was 168 feet long, 25.5 feet wide, and had two diesel engines that could power the vessel to speeds of 14mph. It launched on Lake George in October 1950 and brought passengers up and down the lake through 1989.

After over three decades without incident, the Ticonderoga (II) began to show signs of aging in the early 1980s. The Lac du Saint Sacrement was soon built to replace it, and by 1989, the older vessel served as a floating warehouse.

In 1993, the Ticonderoga (II) made one final voyage while accompanied by a flotilla of boats; it was then cut apart in Ticonderoga and sold.

Around 1968, when the Lake George Steamboat Company operated both the Mohican (II) and the Ticonderoga (II), steamboat travel began to rise in popularity once again. This time, it was because more and more vacationers in Lake George were interested in fun, short steamboat trips, rather than day-long ones.

Although the company couldn't change the schedules of the Mohican (II) or the Ticonderoga (II) to accommodate hourly trips, company president Wilbur Dow commissioned the construction of a new ship - the Minne Ha Ha (II).

In contrast to its predecessor, the Minne Ha Ha (II) was designed to be smaller - roughly 100 feet in length - and visually attractive. The new boat was styled after Mississippi riverboats and was equipped with a red steam-powered sternwheel.

On July 30, 1969, Ruth Dow christened the new vessel the Minne Ha Ha (II), which means "laughing waters." On August 1, the boat began its daily services, offering seven hourly trips on Lake George. After 26 successful years of cruising, the Lake George Steamboat Company felt it was necessary to upgrade the boat to better accommodate the growing number of passengers.

In September 1997, the Minne Ha Ha (II) was brought to the company's dry dock, separated in two, lengthened by 34 feet, and then reconstructed. The steamboat re-launched later that year with additional improvements, such as a new pointy, hydrodynamic bow.

Over the years, the Minne Ha Ha (II) has remained one of the company's most popular vessels, entertaining passengers with family cruises and its joyful steam calliope. 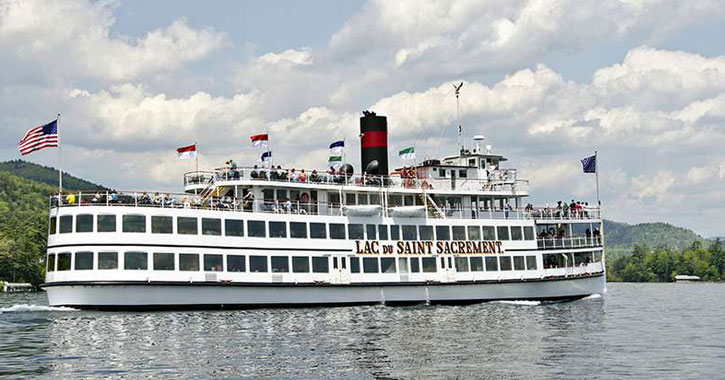 In 1970s Lake George, there was a newfound interest among visitors for a passenger-carrying vessel that could accommodate large groups, provide excellent food service, and feature evening entertainment. As such, the Lake George Steamboat Company considered building a new boat for their fleet.

When the Ticonderoga (II) started to show signs of aging in the 1980s, the company saw an opportunity to construct a new flagship vessel that could offer a variety of specialty cruises - the Lac du Saint Sacrement, which translates to "The Lake of the Blessed Sacrament."

The new Lac du Saint Sacrement was designed by noted marine architect Robert Simons, who developed the plans for the 189 foot/6 inch ship. Its appearance reflected that of 19th century vessels, but the inside contained modern amenities and features.

Starting in 1979, the Lac du Saint Sacrement was slowly built each year until it was finally ready to replace the Ticonderoga (II) in 1989. After a grand celebration and blessing of the vessel, the ship set sail on Lake George.

Looking Ahead to the Future

In 2017, the Lake George Steamboat Company celebrated their bicentennial year with a series of special events, highlighted by cruises featuring their three current steamboats: the Mohican (II), the Minne Ha Ha (II), and the Lac du Saint Sacrement.

The company remains a historic and integral part of the local area, and they plan to continue to grow and provide memorable cruises on the "Queen of American Lakes" Lake George.

Find out more about the Lake George Steamboat Co.'s range of cruises »

« Return to Part 5 of this history series