Temperatures have been unusually warm this time of year in the Lake George Region, and if ice on the lake was thin before, it’s extremely dangerous right now. Whether you’re planning on visiting Lake George for the carnival, ice fishing, or a day trip, do not go on the ice! 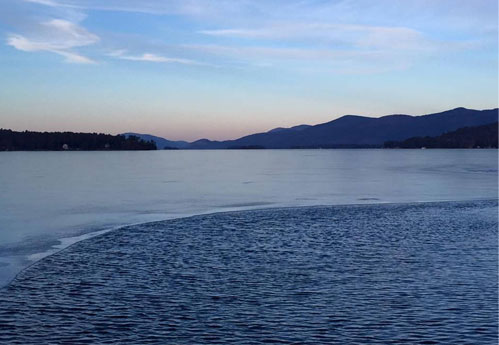 Recently, fluctuating temperatures have made it difficult to tell if a frozen body of water is actually safe. While some parts of a lake or pond may be frozen enough, others sections are too thin for even one person.

Throughout this winter season, Lake George has not fully frozen over. Although ice is visible, it’s become too dangerous to be on, even if it appears thick enough.

Online forums and fishing & hunting Facebook groups have reported that several people have been breaking through the ice at Fort Ann Beach at Pilot Knob and Million Dollar Beach. Not only that, but the Post-Star wrote a story about an ice fisherman who fell through the ice on Harris Bay and had to be rescued by firefighters.

Winter is a popular time to be in Lake George, and many people look forward to going on the ice. However, as tempting as it may be, it’s not worth risking your life on this season’s dangerously thin ice.

See our infographic on ice safety >>