Winter Ice Safety Tips To Live By In Lake George 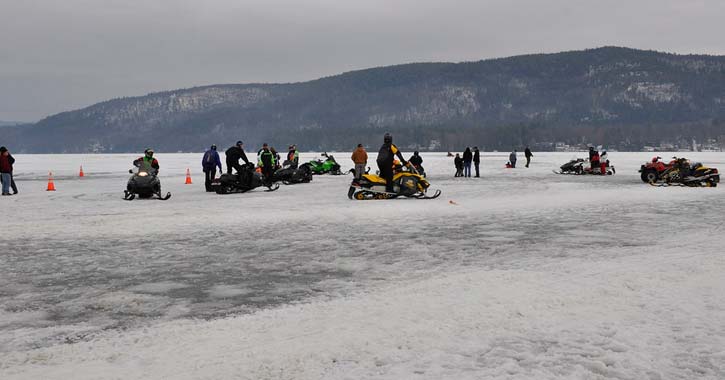 Safe Ice Versus Unsafe Ice - When On The Ice, Be Smart And Be Safe:

When going out on Lake George for ice fishing, skating, or even snowmobiling, you should prepare yourself as much as possible to avoid going through the ice and having to deal with thin ice. Here are some dos and dont's:

Surviving An Icy Plunge Into The Frigid Waters Of Lake George:

Whether you have fallen through thin ice or are trying to rescue someone who has, the most important thing to remember is - you have more time than you think.

What To Do If You Fall Through The Ice:

What To Do If You See Someone Fall Through The Ice:

Is The Ice Thick Enough? Better Err On The Side Of Caution: 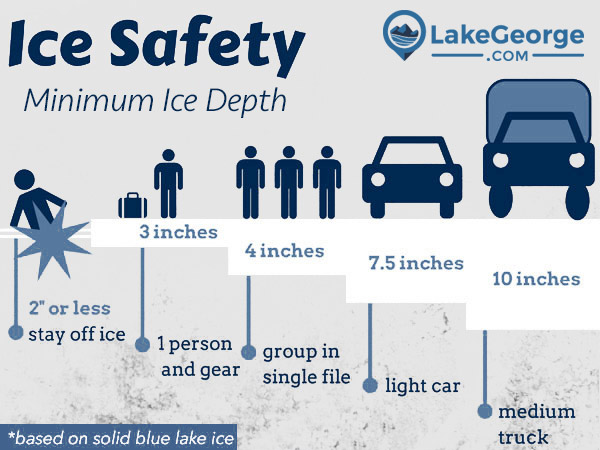 Ice Safety Related To Thickness, As Shown In Infographic Above

The safety of the ice is related to its thickness. The following provides a general guide, based on solid blue lake ice. If the ice is:

"Thick and blue, tried and true - Thin and crispy, way too risky."

The Lake George Association is a 501(c)(3) not-for-profit membership organization, dedicated to protecting, conserving, and improving the beauty and quality of the Lake George Basin.

Hey, everybody. It's Scott here with lakegeorge.com. We're out here on Harris Bay and we're gonna talk ice safety. So, the first thing to keep in mind when walking out on the ice is that there is no such thing as safe ice. Every time you walk out on a frozen lake, there's a risk that's going to come with it. So, don't walk out on the ice thinking that it's 100% safe because it never is.

This tool right here is called a spud bar or an ice chisel. This is the homemade variety, but you can buy these things. It's pretty heavy. It's sharp. If you're gonna be spending a lot of time out on the ice, you should probably get one of these. If you're just gonna go out every once in a while, try to go with somebody that has one so that they can use it and show you how to determine whether the ice is safe.

Before I even step on the ice, I did it over here on shore, I like to give it a couple pokes because if it's not safe, if there's only one or two, you know, two inches of ice, that's not gonna hold my body weight. This is gonna go right through it. So, I give it a couple. So, I just gave that four or five jabs, probably four inches into the ice, five inches into the ice so far, and I don't see any water so we're in good shape.

I'm gonna cut a hole and then we're gonna look at the layers of ice and talk about how thick it is.

Now, I'm not driving my car on eight inches of ice. I'm gonna wait until there's a least a foot of good strong ice to drive my car on, and I'm actually probably gonna wait until I see someone else driving their car out here before I try to bring mine out because it's really not worth the risk. ATVs, snowmobiles, stuff like that, probably six inches is fine, maybe five if it's good and solid.

The thing about ice is, just because there's eight inches of ice here, doesn't mean that there's eight inches of ice over there. So, you can't assume that it's one uniform layer of ice because there could be stuff going on underneath the surface that we don't know about that affects how the ice forms. Inlets and outlets, you know, water running in and out of a body of water will cause the ice to be much thinner. Docks, you should stay away from docks. People put ice heaters and bubblers and stuff on their docks to keep the ice away because the ice will ruin a wooden dock. So, don't go near any docks if you can avoid it.

Any culverts or anything coming from under the road, stay away from those. Any time water is flowing in or out, there's potential for the ice to be quite a bit thinner than it will be in the base. Also, as you work your way out into deeper water, the ice takes a little bit longer to freeze. So, out here on Lake George right now, the middle of the lake isn't frozen at all. It's all wide open and we have eight inches right here. So, it's gradually getting thinner and thinner as we work our way out.

When you're going out on the ice, cut a hole, make sure you know what you're looking at, bring the spud bar. If you're parking on the ice, cut a hole next to your vehicle, and if you see water start coming up through that hole, that means your ice is sinking and you need to get your car off the ice as soon as possible. And again, just keep testing. Keep testing the ice, you know, cut a hole every 50 feet or so, keep that spud bar in your hand and keep knocking on it as you work your way out so that you don't have an accident.

Number one tip, there's no safe ice. There's no such thing as safe ice so don't think that the ice is 100% safe and number two tip is always bring someone with you. Don't be heading out here alone, you know, in case you have an accident there's someone there to assist you. So, good luck. Be safe.

« Back to the Lake George Winter Guide