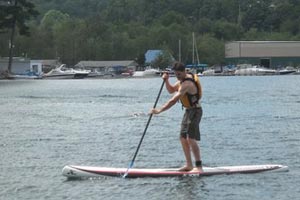 I have tried surfing in the past, with no success whatsoever. As a matter of fact, after about 4 minutes of lying on my stomach paddling out to the wave-breaks, my shoulders were cooked and I wasn't interested in riding anything except a chaise lounge.

Talk about endurance! If you get too far out into the surf and don't have the strength and energy to get back, not only will your surfing days be over, but so will your days in general!

There are several different types of SUP boards, and Ike Wolgin, Owner of Lake George Kayak Co. explained all of this to us before we set out on our adventure. Starting on the west-coast, most early SUP boards were comparable to surf boards. They had to be a slightly longer and wider, but the shape was similar. The shape and size of the SUP board has everything to do with what you want to use it for.

Wider boards are easier to learn on because they are, well, wider. This makes them much more stable to stand on, which in turn makes them much less maneuverable. A wide board is perfect for beginners, as they are pretty forgiving to poor technique and worse balance. As you develop stabilizing muscles and better technique, a narrower board will offer more speed, and a bit more maneuverability.

Another important variable in SUP boards is the amount of rocker that the board has. Rocker refers to the upward curve from one end of the board to the other. Again, the amount of rocker you want depends on the activity. If you are hitting the ocean to shred some waves (bro), you are going to want a lot of rocker which will offer more maneuverability. If you are paddling across calm water on one of the many Adirondack lakes, a flatter board, with less rocker will be smoother and more efficient.

After Ike's lesson, we met up with Harry who taught us about the paddle stroke we should be making, and showed us how it is more efficient to twist your whole body while paddling, rather than standing still and using your arms. He showed us how to get on the board, where to kneel, and how to stand up using the paddle for support and balance. Faith and I paddled around for a little while, and after 10 or 15 minutes we had the hang of it so we headed back over to the dock.

After we had the basics down, Harry hooked us up with the super-slick carbon fiber racing boards. These boards were a little narrower, and much lighter. The new boards had less rocker, and the nose looked a lot like a canoe, able to cut through choppy water. The cruising boards were a lot of fun to ride. We paddled down to the bridge and around the bay for a while, before we raced to the nearest buoy. No need to mention the race results.

Before paddling back over near the dock for our photo opportunity, I managed to lose my balance and fall backwards off of my board. The paddle obviously floats, and the board was tethered to my ankle via leash, so the only think I was able to lose was my sunglasses. They sank right to the bottom before I even noticed that they were no longer on my face. I shouldn't have been wearing them in the first place without some form of lanyard, as Murphy's Law clearly states that I would never have lost them near shore (only once we were paddling out over 30 or 40 feet of water).

SUP is a great workout, I was sore the next day and we were only out on the water for a little over an hour! I wasn't just sore in my shoulders and arms either, my legs were sore from attempting to keep my balance, and my abs were sore from twisting and turning. A full-body workout!

I had a great time, and I am quite interested in getting into this sport. It would be so cool to paddle down the Hudson, or the Battenkill Rivers where everybody else floats effortlessly in tubes. Ike even told us that one of his friends had just taken her board over to Hadley to shoot the rapids on the Sacandaga River!

If YOU want to try SUP, head over to the boathouse at Lake George Kayak, rent a board and try it out it for yourself!

I want to thank Ike, and the Lake George Kayak Co. for letting me have a go at this cool new sport. We had a great time!