Faith's Opinion Of SUP - A Female Perspective On Stand Up Paddling 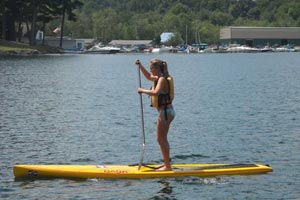 We arrived at the Boat House a little after 12:30 and were greeted by a cheerful owner, Ike Wolgin. It's easy to see why he's referred to as the nicest man in the business, he was very funny and friendly.

He talked to us about the rise of Stand Up Paddling. I thought it was most interesting how he mentioned that a few years ago the only people interested in SUP were those who wanted to sell things to him but now it was really catching on, and many people were trying it.

Ike left us in the capable hands of Harry who set us up with boards and paddles. Let me just tell you, those boards are huge. Towering 7 feet over my head at a little over 12 feet, I was glad it was Harry who was initially handling the boards and the paddles and not me.

Harry gave us a quick demonstration of padding, stressing the importance using your core as the main source of your strength rather than yours arms. From there armed with only a life jacket (LG Kayak Co is a stickler on that!) and a paddle, I tenuously took to my board.

In SUP, you can't just clamber onto your board expecting to stand. You have to start on your knees and stand up from there. I felt a little silly crouching (mostly because I felt like I was going to plunge in without ever leaving the dock) but it was surprisingly easy to transition to standing on the beginner board. I was on! Feeling less and less shaky by the second, I paddled out into the open water.

We took about ten minutes on our beginner boards, getting the hang of the stroke before Scott and I both tried out racing boards. Although I'm glad I started on the chunkier, more stable beginner board, SUP became MUCH more fun on the lighter racing board. I was on "the boathouse favorite" the Bark Competitor, a Surftech board, that was light and snazzy looking with a bright yellow paint job. The board also had grippy pads for your feet, which made me feel more stable and more confident. It was easier to go quickly through the water. So far, there are not any races on Lake George (there aren't really any regulations yet) but on fun boards like mine, they are definitely going to be the next big thing.

The only thing I ever really had trouble with was turning. I felt like there was no efficient way to swivel quickly. However, until someone is escaping on a SUP board in the next James Bond Movie, I don't think this is a huge problem, especially since you can take in the beautiful panorama of Lake George. I never even fell off!

At the end of our afternoon I jumped off my board to cool off and to see how difficult it would be to get back on, had I fallen off. Turns out it's not that hard at all. The board is pretty stable to begin with (it has to be since people are standing on it!) so hoisting yourself out of the water and back on the board is not as challenging as it may seem.

SUP was a good work out, but I think you really have to perfect the stroke if you want it to be a great work out. Some people in California and Hawaii are taking it a step further by doing yoga on the board. I would love to try that, since plank pose and warrior 3 can't work your core in the ways that SUP can.

Stand up paddling was a definitely a unique way to take in the Lake, especially with the super clear water. Even after years of boating and kayaking on Lake George, I felt like I was getting a new perspective on the water. I would highly recommend it for anyone who is looking for a summer water sport or just something new to do with their afternoon. So don't wait, head to the Boathouse on Green Island and try SUP Today.

If YOU want to try stand up paddling, head over to Lake George Kayak Co., rent a board and experience it for yourself!

I would like to thank Ike, and the Lake George Kayak Co. for letting us try this awesome new activity. I had a great time!