GLENS FALLS, NY - The Adirondack Theatre Festival announces its 2011 season of musicals, plays and shows at the Charles R. Wood Theater! Join in the comic, tragic, thought-provoking, and/or surprising new shows that the ATF has to offer.

All-New Shows - Be sure to catch the budding brilliancy of a world premier comedy, a one-woman show, a romance rekindled and the first public reading of a new play about Glens Falls, NY! 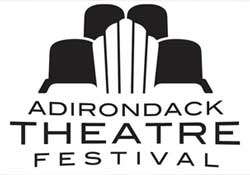 All Adirondack Theatre Festival plays are performed at the Charles R. Wood Theater in Glens Falls, NY. The 2011 season shows include...

The K of D an Urban Legend, by Laura Schellhardt
Showing June 22- July 2
A one woman show featuring more than a dozen characters.

Second Act Caberet
Showing July 10 - 15
Gary Adler, composer & musical director, and his songwriting partner Phoebe Kreutz will have you laughing, tapping your toes and singing along as they perform songs from their musicals: past, present and future.

The First public reading of Dream Street, by Sean Christopher Lewis
A new play about the past, present and future of Glens Falls' South Street.