Known as the “Queen of American Lakes” for its impressive size (32 miles in length) and pristine waters, Lake George will soon be recognized as the smartest lake in existence! Thanks to a new $917,000 National Science Foundation grant, Lake George’s aquatic sensor platform network – which collects essential data about its waters – will soon span the entire length of the lake. 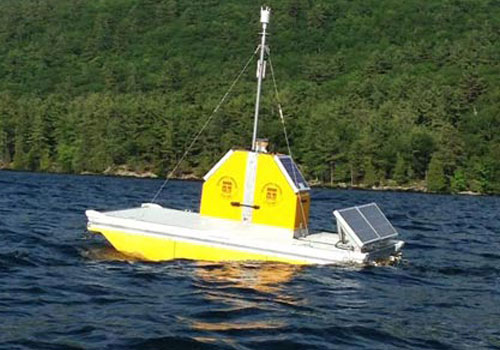 This significant grant was recently awarded to researchers at Rensselaer Polytechnic Institute (RPI) who, in collaboration with IBM Research and the FUND for Lake George, make up the Jefferson Project. The goal of the Jefferson Project is to have Lake George become the world’s smartest lake by setting up 41 aquatic sensor platforms throughout it.

The Jefferson Project has been hard at work since June 2013. 20 sensor platforms were set up in 2015, but most are located in Lake George’s southern basin. The National Science Foundation’s grant, combined with a $500,000 grant received this past May from the New York State Higher Education Capital Matching Grant Program, will help the Jefferson Project complete its sensor network in the coming year.

Once the Jefferson Project installs the final 21 sensor platforms, there will be 41 on Lake George in total. According to a RPI press release, the complete sensor network will create “a real-time digital view of the state of the lake.” It’s expected that the 41 sensor platforms will provide 9 terabytes of data from all parts of the lake.

What the sensor platforms do is collect data about weather, water quality, and water circulation. For example, if the sensor network detects stormwater runoff in a particular area, it will focus on that site and gather even more data. This information is then sent to researchers and supercomputers, allowing them to track the changing conditions of Lake George.

This sensor network will be a vital part of protecting Lake George’s ecosystem for the future and ensuring it remains one of the most beautiful lakes in the U.S. Researchers will be able to better monitor and understand threats to Lake George, such as salt runoff and even invasive species (e.g. asian clams).

Over time, the Jefferson Project will not only be able to track Lake George in the present, but researchers will have the necessary data to predict potential changes in the future.