Winter is coming to the Lake George area, and typically, that means a lot of road salt will be used to keep the streets clear of snow and ice. So much road salt, in fact, that the amount of salt in Lake George has tripled over the past three decades due to road salt water runoff. 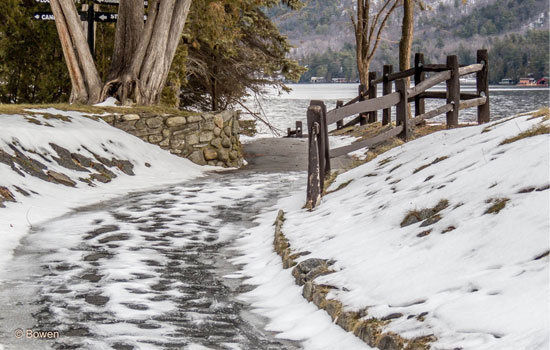 The reason for this drastic increase in the lake’s salt levels is that roughly 15,000 metric tons of road salt are applied on the Lake George community’s roads each winter. As the snow and ice melt, salt is able to make its way from the roads to the water.

Some of the main issues caused by increased road salt usage include damage to trees and vegetation near roads and the lake, corrosion of vehicles and local infrastructure, and changes to aquatic ecosystems.

For example, in a Daily Gazette article, Jim Sutherland, a retired Department of Environmental Conservation researcher, has stated that the calcium in road salt has had a positive impact on the invasive zebra mussel in Lake George, since its shell is made out of calcium.

In recent years, there has been a renewed push to reduce the amount of road salt used in the Lake George area, especially after last year’s inaugural Salt Summit, which was held by the S.A.V.E. Lake George Partnership and the Fund for Lake George. The Salt Summit introduced new methods to reduce road salt usage, and it promoted the use of a “live edge” plow.

This plow adjusts to the contours of a road and can grind and scrape up both ice and snow. The Village of Lake George and the Town of Hague tested the plows last winter, and they resulted in fewer trips, less road salt used, and clear roads.

According to the Daily Gazette, during the second annual Salt Summit in Lake George this past October, there were two major points of discussion:

In early November, the Town of Lake George voted to purchase a new snow plow for this winter season. The plan is to equip it with a “live edge” plow blade as well.

With winter on its way, the Lake George area is preparing to keep the roads and the lake clean and safe from increased amounts of road salt.