Along the northeastern shore of Lake George, the Lake George Land Conservancy (LGLC) has been working to protect the 2,000-acre Sucker Brook complex. Sucker Brook is one of the lake’s ten tributaries, so it can have a significant impact on water quality. As part of its long-term conservation effort, the LGLC has acquired an essential 65-acre parcel in the Sucker Brook area. 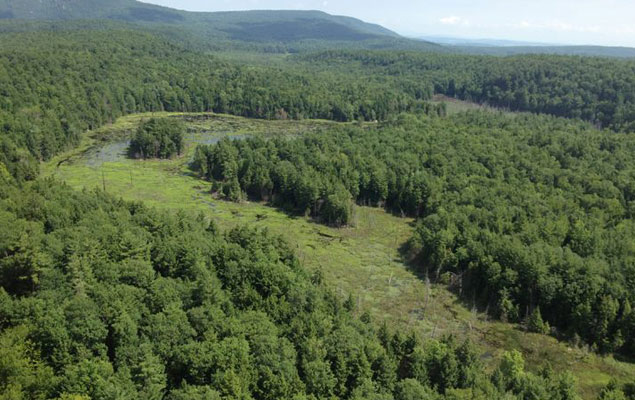 The LGLC’s recent land acquisition is part of the organization’s Bridge the Nose Conservation Initiative. This initiative is part of a 10-year conservation effort that has focused on protecting the Sucker Brook complex and creating a 10 mile recreational trail within it.

The Sucker Brook complex contains wetlands, streams, forests, and rocky areas. Wetlands act as a natural filtration system and are an important part of a healthy lake. The LGLC’s conservation initiative has involved acquiring land parcels in the Sucker Brook area to protect local wildlife and Lake George.

The plan for the continuous trail in the Sucker Brook complex is for it to connect the Towns of Putnam and Ticonderoga. The trail would start near the LGLC’s Gull Bay Preserve at the southern end of the complex and extend north to Mount Defiance.

To further its overall goal, the LGLC has filled in a missing piece of its Sucker Brook properties with its new parcel. The organization owns the Last Great Shoreline Preserve and the Gull Bay Preserve, and now, it also possesses the property adjacent to both – the Bain Parcel.

Located in the Town of Putnam, the 65-acre parcel was owned by Thomas and Christine Bain. In a press release, Thomas Bain told the LGLC, “Sucker Brook and its marsh have been a part of my family for five generations.”

The parcel includes a large portion of the Sucker Brook marsh, which connects to Lake George at Glenburnie. The land also contains a rare northern white cedar swamp, a type of habitat that has been threatened throughout the state.

LGLC Executive Director Jamie Brown said in a press release, “The Bains have been respectful caretakers of this land for generations and understand its important connection to protecting the lake.”

The acquisition of the Bain Parcel brings the LGLC one step closer to ensuring the protection of the Sucker Brook complex for the future.