The Surfside on the Lake has been a Canada Street landmark since the 1940s, and the recent renovations had a lot of people, including us, curious about what lie behind those newly built walls.

We were afforded the firsthand opportunity to sit down and chat with Salim Amersi, owner of Surfside since the early 1980s. We learned all about what is new and exciting at Surfside, and what you can expect from this amazing property in the future. 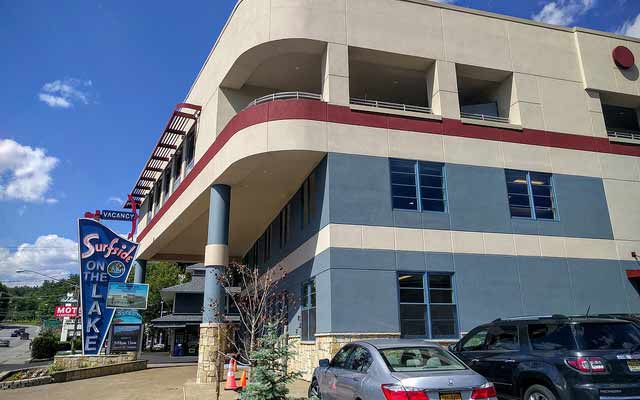 The resort hotel has recently undergone a number of upgrades – from large renovations like completely new rooms, to smaller details like seashells in the sidewalk. It’s truly a unique place where no detail has been overlooked.

Amersi assumed ownership of Surfside in 1983, making 2016 his 33rd year in business. Upon taking over the hotel, he faced some serious challenges.

“We were on the verge of bankruptcy with a lot of debt,” Amersi said. “It was basically a two and a half month season. I gave all I had to it – it boils down to having passion. Ever since then, it’s been my baby.”

Amersi explained that in the past, there was more of an emphasis at the hotel on quantity over quality, but he’s changed that philosophy around.

“People have asked me why I don’t buy motels down in the village,” he said. “I prefer to work on quality compared to quantity.” In other words, Amersi would rather pour all of his energies into making this one establishment the absolute best place it can be.

He’s made many changes over the years – taking down old cabins by the pool around 2008 and 2009, adding a rooftop cabana bar in 2014 – but the recent renovations have been bigger and better than ever before.

Amersi has torn down 50 rooms to add in 50 completely new ones – all with private balconies, and all in a brand new building. He’s also added in suites, meeting rooms, and an underground parking garage, just to name a few of the major improvements.

However, there are countless tiny details that have also been incorporated, which is what truly makes the resort special. It’s these small but significant features that allow Amersi’s detail-oriented nature and intense passion for the business to shine through.

As you walk from the parking lot into the hotel you’ll notice seashells and starfish built right into the sidewalks, which are adorned with tiny blue stones. “Kids will remember [the seashells] and say they want to come back,” Amersi told us.

New LED lighting all around the building and on the roof really make Surfside stand out at night. The lighting is able to illuminate special details like flowers growing alongside the building.

The brand new rooms include queen sized beds with fun, high quality bedding and mattresses, a mini refrigerator, and a kitchen sink with a counter top in case guests want to make their own sandwiches or other food. There is also a private balcony for every room with an outdoor table and chairs constructed just for these balconies. 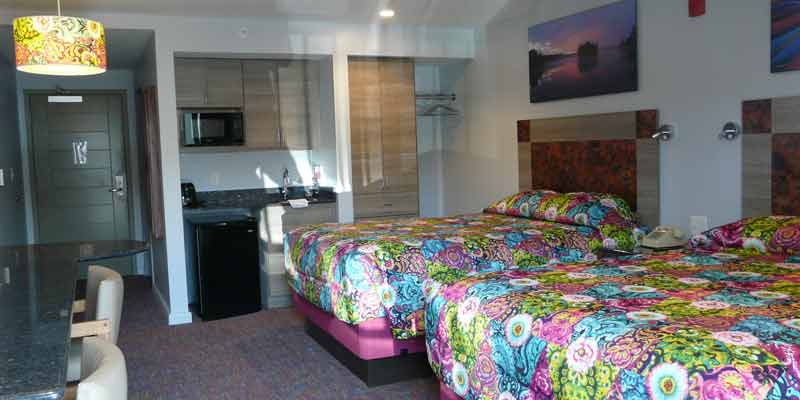 Once again, we can see Amersi’s attention to detail coming through with every single feature: the color scheme matches from the bedding to the carpets to the lamps to the patio furniture, the art work on the walls is all of Lake George, and there are even special peepholes in the doors just for kids in addition to the normal ones.

Even the new underground parking garage displays crisp, cool colors and a funky design, coinciding perfectly with the fun style and color schemes in the hotel.

Amersi opted to use a more expensive intumescent paint throughout the garage. In addition to being fire retardant, it better resists dirt and dust than less expensive options. There is a fresh clean look from the hotel to the outside grounds and beach to the parking garage.

While roughly 95% of the project is complete, the main component left is the two meeting rooms which are still under construction. “We don’t expect to do any business with that this season,” Amersi explained. “We haven’t marketed them yet.”

With regard to drawing in more of a business crowd with the meeting rooms Amersi said, “We have to get our feet wet in that. We have to see how we’re going to utilize the space and how it’s going to be occupied down the road.”

Amersi does feel confident about the prospect of the Lake George area in general drawing in more business people and more diverse crowds: “I’m optimistic that we have a lot to offer here. It’s about getting a good strategy in place. We do have a great destination, and there’s no reason why we shouldn’t be excelling even more than we are.”

Surfside is certainly in a position to excel better than it ever has in the past. Amersi is immensely proud of all that has been accomplished with the renovation – and rightfully so.

Upgrades began in the third week of last October, with the new rooms ready for Americade in June; the existing rooms were available by Memorial Day weekend. Undergoing such a substantial project in such a short amount of time is nothing short of amazing.

“It’s been hectic,” Amersi said. “It’s been draining with having to complete the project while doing business at the same time. To do a project of this caliber in seven months is a great accomplishment.”

Additionally, Amersi’s wife, Moech Amersi, has been instrumental in her role with the décor, color scheme, architecture, and even just supporting Amersi during this time: “She’s been my cheerleader during the stressful moments.”

One aspect of the resort Amersi has kept the same is the sign out front, which has remained since the business opened in the 1940s. 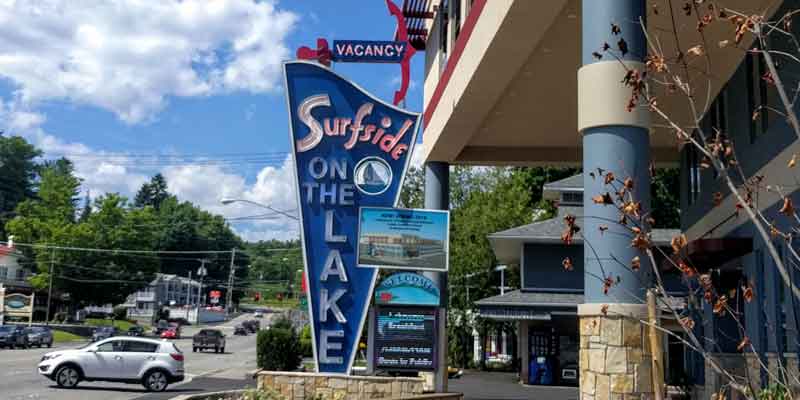 The sign really speaks to the vintage, retro feel of the establishment, paying homage to the long history of the remarkable hotel. Amersi could not have better merged the traditional aspects of the resort with the newer, modern amenities.

“Our goal is to have the customer be happy in their stay,” Amersi said about the bottom line objective of the hotel. “If I can’t achieve that, I should not be in the business.”

Right now, Surfside operates within a six month season from May through October – Amersi expects to extend the season to year-round in 2017, complete with winter packages so people can better budget their vacation.

“We’re looking to pair up with wintertime activities – skiing, snowshoeing, etc,” Amersi told us. “Any activities we’d love to reach out or have people reach out to us. Not everyone likes to ski. We want to give people a lot of options.”

Amersi says he’s sure he’ll come up with even more for Surfside as soon as he has the energy. “We have to keep on our toes. We’re always tweaking things, it’s always going to be an ongoing process.”