On the night of Saturday, June 18, while most people along the shores of Lake George were asleep, one man was swimming from Ticonderoga to Lake George Village – the entire length of the lake. Hailing from Saratoga Springs, 47-year-old David Dammerman swam from Saturday through Sunday and broke the record for the fastest time someone has ever swum the length of Lake George! 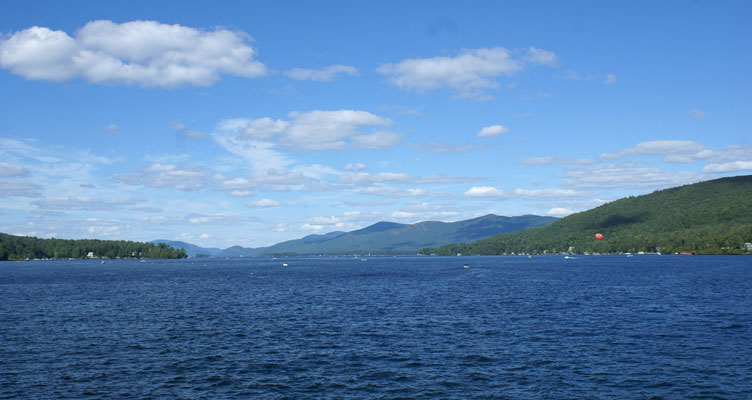 David Dammerman is a former collegiate swimmer who was inspired by Diane Struble, the first person to swim Lake George from end to end. Struble, a mother of three, completed the swim in 35 and 1/2 hours in 1958. The lake is 32.2 miles long, but she swam 36 miles to avoid islands. In the end, her awe-inspiring performance was memorialized with a plaque in Ticonderoga.

Dammerman, who swam the English Channel three years ago, was prepared to take on the grueling physical and mental challenge. On June 18, at 5:00PM, he began his record-breaking swim at Diane’s Rock (the location of the plaque) in Ticonderoga. After 18 hours, 54 minutes, and 22 seconds, Dammerman reached the southern end of Lake George at noon on June 19. His time easily beat the previous record set by John Freihofer in 1981 of 21 hours, 54 minutes.

Although he had a four-person team with a powerboat and kayak to provide light and nourishment throughout the night, Dammerman still had to contend with “dark periods.” He thought about quitting multiple times, and cold spots in the water were particularly miserable. In a Daily Gazette article, Dammerman said, “I counted to about 1,800 stokes and kept things moving, half-hour to half-hour.”

What’s even more impressive about this feat is that Dammerman is ready to take on Lake George again in September during the marathon swim event. The swim, which will last from September 17-18, will challenge solo competitors and relay teams. Registration is closed, but it’s expected the event will raise at least $14,000 for charities.

Who knows, we might see another record-breaking performance during the Lake George Marathon Swim!