With the exception of this week’s unusual April snowstorm, the weather this spring has been incredibly mild. Thanks to the somewhat unseasonable warmth, Great Escape has decided to move its opening weekend up by one week! 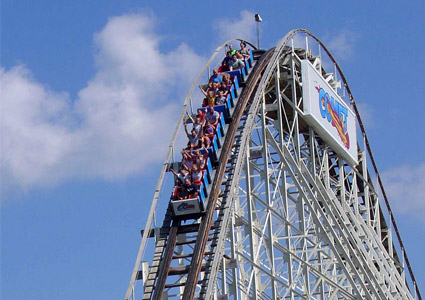 The 2016 Great Escape season will begin on May 14, two days earlier than last year’s debut, and seven days in advance of the previously scheduled May 21 opening.

Splashwater Kingdom will follow on May 28, with daily summer hours for both the theme park and the water park set to begin on June 15.

As for Great Escape’s new attractions, Greezed Lightnin’ – the looping 70-foot-tall coaster – will open up on May 28, and the New Revolution Virtual Reality Coaster will make its debut sometime in June.

In celebration of the early opening, guests who bring a Scholastic-approved reading book appropriate for students in Kindergarten through 6th Grade will receive half off the cost of General Admission during opening weekend (May 14-15). In addition, Season Pass Holders can bring a guest with them for $9.99.

Making plans for the summer? In addition to visiting Splashwater Kingdom, you’ll want to check out these top 10 water attractions and water parks in Lake George!