For the last 13 years, television personality and Food Network star Rachael Ray has returned to her Lake George roots to give a live cooking show to a packed auditorium in support of local causes. It was just announced that Ray will be back once again this April, and we couldn’t be more excited! 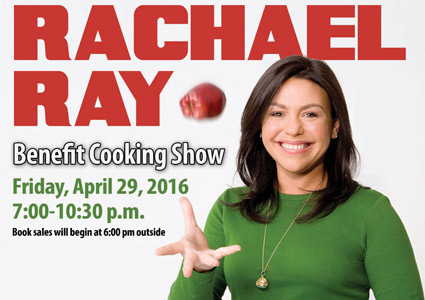 Rachael Ray’s 2016 Benefit Cooking Show will take place on Friday, April 29 from 6:30pm – 10:30pm in the Lake George High School Auditorium. As always, this event is expected to be massively popular, so ticket sales are limited to just one day.
Those interested in attending may purchase tickets ONLY on Saturday, April 2, 2016 from 9:00am – 12:00 noon at the Lake George High School Main Entrance. Tickets are just $25 and there is no ticket limit this year.
Ray’s Benefit Cooking Show has raised almost $200,000 for the Lake George High School Alumni Association and LG Central School District projects over the last 13 years. As Ray was a 1986 graduate of the school, the cause is especially close to her heart.
This year’s show features a people & pet food exchange, a book sale and signing, recipe handouts, cooking show Q&A, recipe tastings prepared by Derek Buck & Crew from Bogey’s Pub, and desserts made by the Lake George Baking Co.
Don’t miss out on this opportunity to see Rachael Ray live and to help support Lake George students and graduates. Mark your calendar for April 2 to secure your tickets for this one-of-a-kind event!