Plan Lake George Fun On LakeGeorge.com!
Find a Business Enter Giveaways Advertise
Home  »  People & Interviews  »  Mayor Blais in the Spotlight: Questions About the Past, Present and Future
Mayor Robert Blais is among the longest-serving mayors in the country. He took a few moments to fill us in on what’s new in the area, the most notable changes in the Village he has seen in his 44 years as Mayor and the contributions he plans on making in the future. 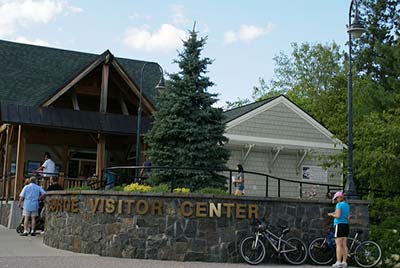 Blais recalled that his first year in office was focused mainly on bringing back the family image to Lake George. He told us, “When I took over as Mayor I think the Village was in the midst of the so-called ‘riots’ in the late 1960’s and 70’s and I think my job at that time was devoted to bringing back the image of the Village as a family resort.”
Blais continued by stating that he also worked on upgrading some of the laws of the police department, as well as the way the police reacted to different situations. One of the things he’s most proud of is the fact that “There wasn’t even a flower planted in the village when I took over. I tried to soften the whole image of the village and make it more family oriented.”

Prior Positions
Before taking office in 1971, Blais held several different jobs in the Village of Lake George. He was a Trustee for two years prior to becoming Mayor. Before that, he was Sergeant in the Village Police Department. Blais also stated he was a Deputy Sheriff for Warren County. In addition, he operated an ice cream stand for nearly 20 years and ran an Arcade on Canada Street for nearly 40.
Notable Changes
The biggest project that Blais has taken on is “increasing 100 fold the free public events in Lake George.” This summer, Shepard Park will be booked solid every single night from Memorial Day to Labor Day with free entertainment.
Blais is also responsible for starting a dozen of the festivals currently held on an annual basis. This includes the Elvis Festival, the Summer Festival and the Fishing Derby. Blais also stated that the Village used to shut down after Labor Day, and now special events run through Columbus Day.
He notes that the greatest capital project he took on was the Lakefront Walkway. It took eight years to build and four years to sell to shoreline property owners. Blais also mentioned the beautiful Visitor Center on the corner of Beach Road as a huge accomplishment. “Every building in the Village, we have, I’ve been in on it,” Blais stated.
The Future of Lake George
“The future for Lake George is very bright,” Blais told us. Real estate developer Dave Kenny recently made the single largest investment in Lake George in over 15 years. This investment will be going towards a brand new Marriott in the Village. “We predicted that because of Mr. Kenny’s investment, other properties would follow and sure enough, they have,” Blais said.
Another major investment has been made in the building that used to house Off Track Betting. Scotty’s Motel, the largest single property on the Lake has been sold. It’s slated to become a new modern resort in a couple years. And lastly, a brand new distillery and brewery will be making their way to the Village.
Blais concluded by stating, “Some of the buildings on the main street of the Village needed upgrades and I think we’re going to see a lot of that now. In order to stay competitive in today’s market, people do need to make some upgrades.”
Contributions
There is no doubt Mayor Blais has made many lasting contributions during his years in office. He told us that, “I always fashion myself as Lake George’s greatest promoter. As one of the longest mayors in United States history, I hope people look back at my longevity and no matter where they turn in Lake George, they will see a little piece of something that I had my hand in.”