The Big Apple Circus is coming back in to town to present Legendarium on July 13th through the 28th! Here you’ll get a sneak peak of what this year’s circus fun will include…

This is where you will be able to experience the thrills and excitement of the Beauties, Daredevils and clowns from another era! This is the 35th anniversary season and no seat is more than fifty feet away from the most spectacular performers from around the world.

This will be the second engagement at Charles R. Wood Park in Lake George, New York and Artistic Director, Guillaume Dufresnoy, says that The Big Apple Circus “is absolutely delighted to come back to the Lake George Area.”
The Big Apple Circus has been entertaining audiences of all ages for 35 years. The performers feature world-class circus artistry that will provide an instant connection between the audience and performers.
The Big Apple Circus is a non-profit organization that is committed to invigorating the communities they serve with the joy and fun of classical circus. They run a lot of community programs, some of which include after school programs and shows for the blind and deaf. 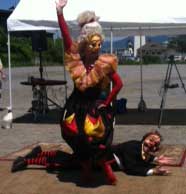 We got a first look at two of the many performances that are to come. One of which was a contortionist who has “a backbone as flexible as an archer’s bow” and who has the ability to do something that only two other women in the world can do; but we won’t find out until the show!  The other premier act was the Acrobuffos, a husband-and-wife clown team that will bring the house down with their comedy.
This two hour show will take place under an air-conditioned Big Top in the Charles R. Wood Park. The box office opens on July 11th right in front of the Big Top.
Don’t miss your chance to see the world’s best performers in Lake George!
Learn more about the Big Apple Circus