This year we celebrate the 10th Anniversary of LakeGeorge.com’s Elvis Festival in Lake George NY! Come and enjoy performances by Elvis tribute artists of all ages and skill levels. Elvis impersonators from all of the country compete at the four-day festival, taking place May 29 – June 2, 2013. 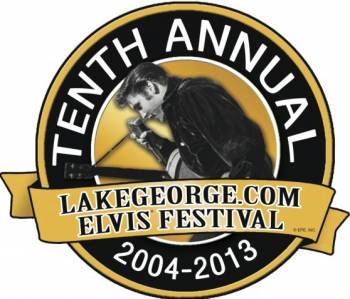 Elvis Competitions will take place over three days of the festival and includes five different categories. Deadline to enter is April 15, 2013. The Lake George Forum will host the 3-day competition. Tickets to the 10th Anniversary of LakeGeorge.com Elvis Festival are available now!
There will be something Elvis going on in downtown Lake George throughout the entire festival, including nightly entertainment, so you can choose which events you want to attend. Bring all of your family and friends – there will be something for everyone! See the full schedule of events.
For further information call (518) 681-7452.
View a video of LakeGeorge.com Elvis Fest!
Whatever type of lodging accommodations you prefer, Lake George can provide! Find Hotels, Motels, Resorts, Bed & Breakfasts, and Campgrounds and view an extensive list of Lake George dining options.
When we asked some of our Facebook followers to tell us their fondest memories of Elvis Fest, and why they think it’s such a popular local event, Deirdre Daly replied – “The day he died we were on vacation in Lake George, NY. I remember it clearly all these years later.” Mark Warner states, “I think it’s a testament to what Barnum said – No one ever went broke underestimating the taste of the American public.”
Will you be attending all, or at least some, of the entertaining events at the 10th Anniversary of LakeGeorge.com Elvis Festival in stunning Lake George NY?