Altar Boyz Review: A Play At The Adirondack Theatre Festival 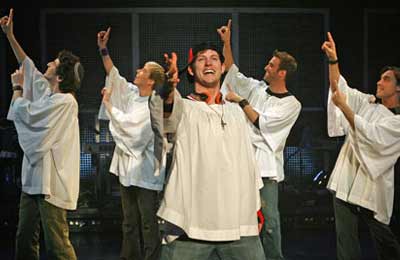 Having heard the rave reviews for Adirondack Theatre Festival's recent production of the off-Broadway smash "Altar Boyz," I decided to see what all the fuss was about. It turns out that to say that all the fuss was well-deserved is an understatement.

A play disguised as a concert on the fictional "Raise the Praise" tour, "Altar Boyz" is full of subtle satire blending seamlessly with all the fervor of an Evangelical convention (minus the "preachiness".) The lyrics of every song are maddeningly clever - puns, clichés, and sly jokes abound, but they never feel contrived or syrupy. When Mitch Dean's Mark, the group's best-dressed Boy, sings "Epiphany," a song of "coming out of the cloisters" to proclaim his identity with pride, he assures the audience that they - Catholics, that is - are everywhere - "we are your teachers, your doctors, and your Burger King cashiers." He and the other Boyz sing every word with innocent, charming smiles, and the result is genuinely funny.

The music of "Altar Boyz" seems to cover nearly every genre in the spectrum. While all the songs retain that classic pop feel, there is a satisfying variety to the array - over-the-top power ballads complete with the highest high notes mix with Latin-flavored tunes, hip-hop, and even a little rap. The melodies never get boring.

All five actors have perfect comic timing and unrelenting energy. It is clear right from the opening song that they are all fantastically talented, both vocally and physically, as nearly every song incorporates boy-band-worthy dance moves. Only, these Boyz would put 'NSync to shame. While both the play itself and the solid performances suggest the ideas of unity and the power of a group, each actor shines alone, too. While satire aims to present the audience with stereotypes, each character is endearingly unique in his own way.

Xavier Cano is Juan, the group's acknowledged "Iglesias;" Lee Markham's Luke is the bad-boy type; Matt DeAngelis's Matthew is the handsome frontman. And then there's Abraham. When Todd Stern's Abe, the lone Jew of the group, first arrives in the boys' church, one of the boys remarks, "Are Jews even allowed in here?" Abraham's answer is succinct, and funny in that I-really-shouldn't-laugh-but-it's-true-way that pushes the boundaries of political correctness.

While the show does encourage the audience to question the conventions of organized religion and its growing appeal to the entertainment industry, it gently pokes at it with good intentions rather than negativity or crude jokes. The Soul Sensor DX-12, a countdown of sinners in the audience, is an inspired (no pun intended!) touch that reminds us that while some churches may push for numbers and statistics on saved souls, at the heart of spirituality lies the idea that maybe we should all just stick together and be good to one another.

"Altar Boyz" is a part of the Adirondack Theatre Festival, performed at the Charles R. Wood Theatre in Glens Falls NY.