Everyone who knows about the Lake George Steamboat Company has heard of the Minne Ha Ha (or heard its famous steam calliope), but did you know the present day steamer isn't the first Minne Ha Ha? The one seen today on Lake George is actually the second Minne Ha Ha, built in the mid-1800s.

After the Lake George Steamboat Company's John Jay burned and sank to the bottom of Lake George in 1856, the company salvaged its engines and boiler and installed them in their next ship, the Minne Ha Ha (I), which would operate for over 20 years. 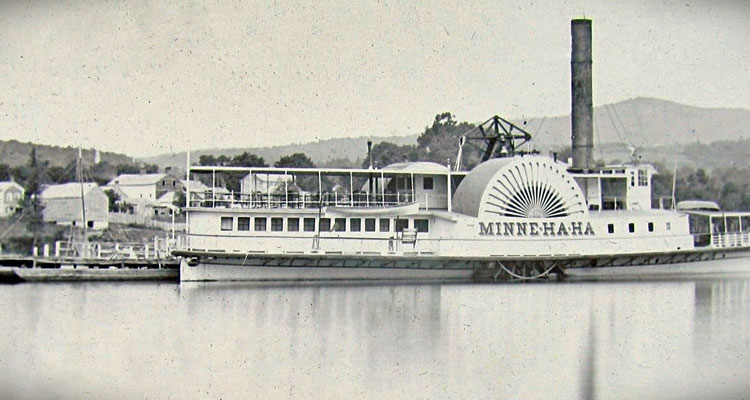 Christened in the spring of 1857, the Minne Ha Ha (I) was 144 feet long, 22 feet wide, and had a wood-fired walking beam engine that propelled the boat to speeds of 13mph. With its two decks and large sidewheel, the steamboat featured a modern design.

About 400 passengers could ride on board the vessel as it made daily round trips from Lake George Village to Ticonderoga. Some of the scheduled stops included the new Fort William Henry Hotel dock, Trout Pavilion, Bolton Landing, Hague, and Cook's Landing. The Minne Ha Ha (I) was the last steamboat on Lake George with a wood-fired engine, and each round trip required six cords of wood.

When the Civil War began (1861-1865), business suffered at the Lake George Steamboat Company. Since the country was embroiled in war, summer tourism in Lake George diminished and there were less people visiting and taking steamboat trips.

Despite this setback, the Minne Ha Ha remained in operation and business would take off once again following the end of the war. Not only did wealthy individuals begin building luxury homes along the Lake George shoreline, but newly built hotels attracted more visitors to the area during summer, leading to a period of growth for the company. 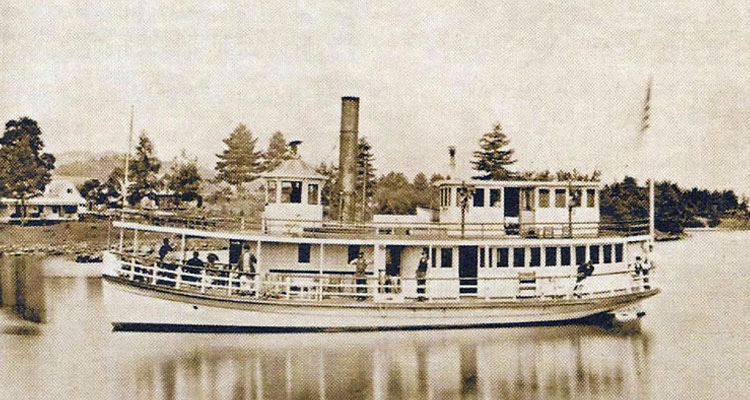 When the Lake George Steamboat Company realized the Minne Ha Ha (I) couldn't handle the booming business alone, they commissioned the construction of an auxiliary steamboat. The cost to build this vessel was around $20,000, and it launched in the spring of 1869.

Compared to the past steamboats, the Ganouskie was the smallest to ever sail for the company. The vessel was just 72 feet long and 20 feet wide, and it could reach a max speed of 11mph. Made entirely of wood, it was also the first propeller driven ship on Lake George.

The reason the Ganouskie was so small was because the company only wanted it to provide supplemental travel services. While the Minne Ha Ha (I) continued to sail from the village to Ticonderoga, the Ganouskie carried a max of 50 passengers on round trips starting from the north end of the lake.

This was the first time the Lake George Steamboat Company operated two vessels on the lake simultaneously, and it would set a precedent for them.

New Ownership For the Company

Although steamboat travel was popular for residents and visitors in Lake George, a different form of transportation soon made its way to the region - the railroad. The late 1800s featured the creation of the First Transcontinental Railroad across the U.S., and in the Northeast, the Delaware & Hudson Railway Company was expanding their reach and influence.

In 1872, the railway company acquired the Lake George Steamboat Company and soon began to make major changes in the area. First, they constructed railroad track from Lake Champlain to Ticonderoga and the steamboat dock at Baldwin. Then, the company extended their railroad from Glens Falls to Lake George Village. This allowed them to have control of railroads at both ends of the lake, as well as steamboat travel on the lake.

During this period, the Minne Ha Ha (I) was also growing older, and the steamboat company knew it was time to retire the boat. In 1878, the vessel was stripped of its engines and then sold to a local buyer. In its place, the company added the Horicon (I), and the new steamer would operate with the Ganouskie for a few years.

Want to find out what happens next? Stay tuned for the next part of the story in our monthly history series!

« Return to Part 2 of this history series