Before we delve deeper into the storied history of the Lake George Steamboat Company, here’s a short recap of how it all began. Steamboats were invented and introduced to the U.S. as a new form of water transportation in the late 18th century. In 1817, the Lake George Steamboat Company was incorporated, and their first two boats brought passengers on trips up and down the lake.

Their second boat, the Mountaineer, was retired in 1836 due to age. However, as this was a time of adventure in Lake George, the company would soon restart their steamboat service two years later in 1838.

In the early 1800s, the Lake George Region was transforming into a hotspot for “adventurers.” Perhaps inspired by the events of James Fenimore Cooper’s popular book “The Last of the Mohicans” (1826), people were interested in Fort William Henry and wanted to see Lake George and the surrounding area for themselves.

As it turned out, steamboats were a popular way for visitors to see the sights from the water. After the Mountaineer was retired in 1836, the Lake George Steamboat Company looked to construct a new steamboat that would be bigger and faster than the previous two - the William Caldwell.

The Story of the William Caldwell 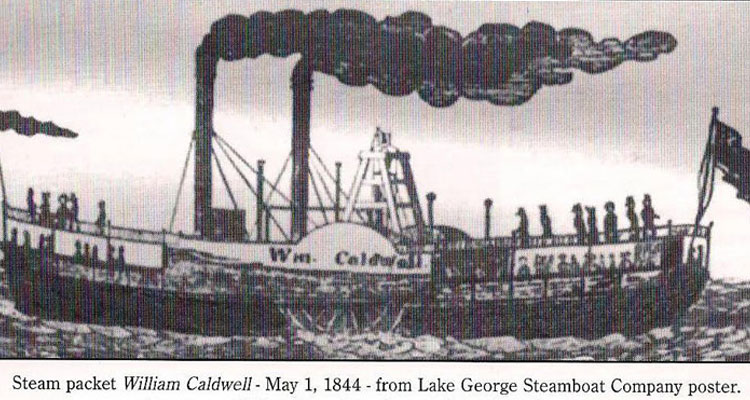 The William Caldwell was named after the son of James Caldwell, the first director of the steamboat company. The steamer was built in Ticonderoga and began to ferry passengers in the spring of 1838. At 140 feet long and 17 feet wide, the boat weighed about 150 tons.

This was a side-wheel steamboat powered by a special “steeple-engine,” which operated a horizontal cross beam up and down. The boat’s engine and design allowed it to reach speeds of up to 12mph.

During the William Caldwell’s lifespan, the Lake George Steamboat Company used it to ferry travelers from Lake George Village to Ticonderoga. Starting at 8:00am, the steamboat would leave the Lake House in the village, travel north to Ticonderoga for 3.5 hours, let passengers explore the area and Fort Ticonderoga’s old ruins, and then return home by 6:30pm.

For 10 years, the William Caldwell operated on Lake George and offered these daily round trips. In 1848, the steamboat was retired due to signs of deterioration and left to sink in the bay north of Shepard Park. 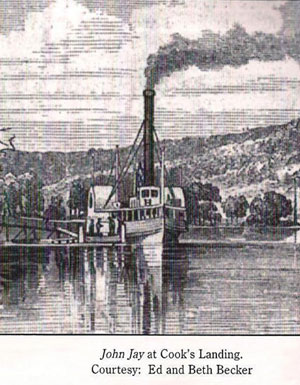 After the company retired the William Caldwell, their next steamboat would be the short-lived John Jay. Built by John J. Harris in 1850, the steamer was purchased by the Lake George Steamboat Company in 1854 and launched that spring.

Compared to the William Caldwell, the John Jay was much heavier and yet slightly faster. It was 145 feet long, 20 feet wide, weighed 250 tons, and was powered by a 75 horsepower wood-fired steam engine which could move the large boat 13mph.

Under the company’s ownership, the John Jay made daily round trips from Lake George Village to Cook's Landing in Ticonderoga where stage coaches would transport passengers around the Lake Champlain area. Unfortunately, the John Jay would only survive two and a half seasons.

On July 29, 1856, a sudden fire broke out in the engine room while the John Jay was heading from Ticonderoga to the Garfield Hotel in Hague. Around 80 passengers were reportedly on board at the time, and when the alarm was sounded, several jumped into the lake to escape. Six passengers lost their lives that day, and the tragedy is recognized as the only deadly accident in the company’s history.

Although the ship was gone, its spirit would live on in the steamboat company’s next boat, the Minne Ha Ha (I), which was constructed using the John Jay’s engine and boiler.

Want to find out more about the Minne Ha Ha (I)? Look forward to our next installment in this steamboat history series!

Celebrate the company's bicentennial at these 2017 events »