Around the early 1870s, some major changes took place at the historic Lake George Steamboat Company. First, as the popularity of steamboats grew, the company decided the best way to keep up with demand was by operating more than one vessel at a time on the lake. Not long after, the Delaware & Hudson Railway Company acquired the company, giving them control over rail and steamboat travel throughout the Lake George Region.

As the new owner, one of D&H's earliest decisions was to retire the old Minne Ha Ha (I) and replace it with a massive steamer that would run for over 30 years - the Horicon (I).

The Horicon (I) Launches

Built in Ticonderoga, the Horicon (I) launched from Cook's Landing in 1877 and made its first trip south to the Fort William Henry Hotel in 1 hour and 45 minutes. A sidewall steamer, this vessel was the Lake George Steamboat Company's second longest boat at 195 feet in length and 32 feet wide.

The huge steamboat was built entirely out of wood and had engines that could propel it to a max speed of 20mph. In addition, it was one of the most handsomely furnished steamers of that period with grand saloons and cabins as well as a handcrafted bald eagle mounted at the top of the mast.

The Horicon (I) received its name from James Fenimore Cooper's novel "The Last of the Mohicans," in which the character Hawkeye refers to Lake George as "Horicon."

During its lifespan (1877-1911), the steamer would become a recognizable fixture on Lake George. This was a period of time when Millionaire's Row was developing and wealthy individuals were constructing majestic summer homes along the shoreline. As such, many famous individuals would visit the area and ride aboard the Horicon (I), including a young Teddy Roosevelt, Ulysses S. Grant, and others.

For years, the steamer ran opposite the Ganouskie, taking passengers from Lake George Village to Ticonderoga. In 1884, the Ganouskie had begun to deteriorate, and the steamboat company decided to dismantle it and build a brand new vessel named the Ticonderoga (I).

Similar to the Horicon (I), the Ticonderoga (I) was built in Ticonderoga to replace one of the company's recently retired steamboats. At 172 feet long and 28 feet wide, this steamer is recognized as the last large ship built entirely out of wood on Lake George.

The Ticonderoga (I) was capable of reaching speeds of 20mph, making it an effective replacement for the Ganouskie. Unfortunately, after operating from 1884-1901, a fire occurred below the steamboat's deck on August 29, 1901. All of the passengers were safely unloaded, but the ship was left to burn in Heart's Bay.

The First of the Mohicans 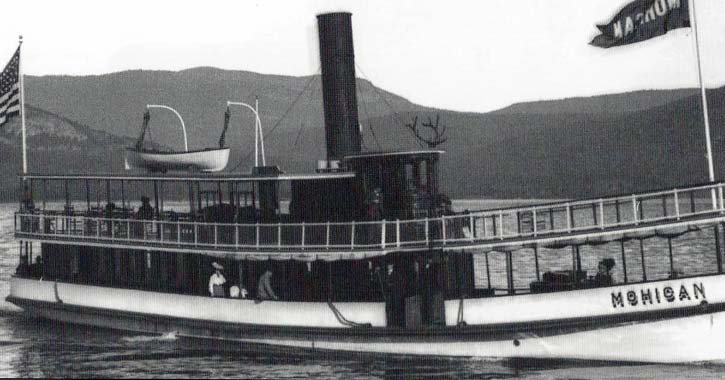 A few years before the Ticonderoga (I) burned down in Heart's Bay, the Lake George Steamboat Company aimed to launch a third vessel on the lake to supplement the travel services provided by their other two boats. Named the Mohican (I), this steamer was built in 1894 by a private owner, Captain James Everett of Glens Falls, and acquired by the steamboat company for roughly $13,000 in 1895.

Named after the main Native American tribe in "The Last of the Mohicans," Mohican (I) had a 200 horsepower steam engine connected to a single propeller. The boat was 93 feet long, 17 feet wide, and could reach 15mph.

As part of the steamboat company, the Mohican (I) was used to ferry passengers daily from Ticonderoga down to Lake George Village. However, during the summer, it was also used to make extra trips to Paradise Bay and the Narrows.

After 14 successful years of service, the steamboat was retired in 1908 and replaced with its successor, the Mohican (II). The Lake George Steamboat Company would soon launch multiple vessels in the early 20th century, but that is a story for the next part of this history series.

Stay tuned for Part 5 of the History of the Lake George Steamboat Company!

« Return to Part 3 of this history series