Why You Shouldn't Feed Ducks or Nuisance Species in Lake George 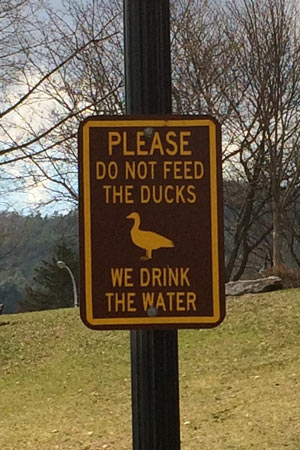 Have you ever seen a sign in Lake George that says "Please Do Not Feed The Ducks - We Drink The Water" and wondered why? As it turns out, there are actually a number of reasons why you shouldn't feed the ducks!

However, ducks aren't the only local species you shouldn't be feeding. Both Canada geese and double-crested cormorants can quickly become a nuisance by causing damage and raising health and safety concerns. Find out why you should avoid feeding any of these birds in Lake George.

According to the Lake George Association, when people begin feeding ducks or other birds in certain areas, it trains them to return frequently looking for more food. This results in a greater concentration of birds in that location than there naturally are, which can cause property damage and interfere with human activities.

In Lake George, just some of the ongoing issues include over-grazed lawns, greater accumulations of droppings and feathers on play areas and walkways, public health concerns at beaches and drinking water supplies, aggressive behavior by nesting birds, and more.

Various health and environmental concerns are one of the main reasons why Lake George has signs to not feed the ducks. Learn about how ducks, Canada geese, and double-crested cormorants are becoming increasingly problematic for the local area. 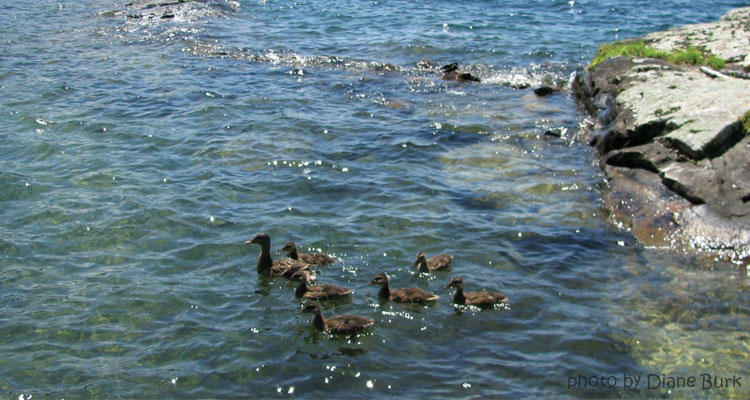 It makes sense that if a large quantity of ducks feasts on land, they will naturally return to the water and produce a larger amount of feces than they would normally. In the case of Lake George, we're talking about the same water that people play in and that residents and local businesses use for consumption.

Duck feces contain higher levels of phosphorous, which is only naturally found in low levels in Lake George. A phosphorous quantity that is greater than normal can result in algal blooms that reduce the lake's oxygen level and can begin to kill off other plants and animals.

Humans can also contract an itchy rash caused by a flatworm parasite when swimming in waters that are inhabited by an unusually large quantity of ducks.

As noted by the Lake George Association, populations of Canada geese have recently become "resident" geese in New York State and Lake George, meaning they are staying in certain areas year round. There are a few different ways to discourage geese from settling near your property, but one of the best ways is to not feed them.

One Canada goose can produce roughly a pound of droppings per day; when there is a large flock in an area, it's more likely that the water quality and land will be negatively affected.

While double-crested cormorants are more of a problem at the nearby Lake Champlain, the birds have started to migrate to Lake George in greater numbers.

Cormorants are large, fish-eating birds that nest in high densities and in small areas. They are infamously known for nesting on islands where they cause damage, kill vegetation, scare away other nesting birds, and impact local fisheries.

Harm to the Birds

When you feed ducks, Canada geese, and double-crested cormorants, it harms the birds in a number of ways, including:

So even though feeding the ducks and nuisance species may seem harmless, it actually has a negative impact on property, water, people, and even the birds themselves. If we work together to stop feeding them, it will result in a cleaner and healthier Lake George for all of us to enjoy!

Instead of feeding the ducks, feed yourself! Find Lake George area restaurants »