Most Lake George lovers are aware of the fact that this beautiful region has a bloody past. One of the key battles of the French and Indian War was fought right here, so it should come as no surprise that hauntings and ghostly presences have been reported at several sites in the area. Syfy’s Ghost Hunters even visited Fort William Henry a few years back and found some evidence of paranormal activity.

Have you ever experienced any paranormal activity in Lake George? Are you brave enough to try to conjure up spirits from the past? If so, we hear there’s a way for you to catch a glimpse of one of Lake George’s ghosts for yourself… 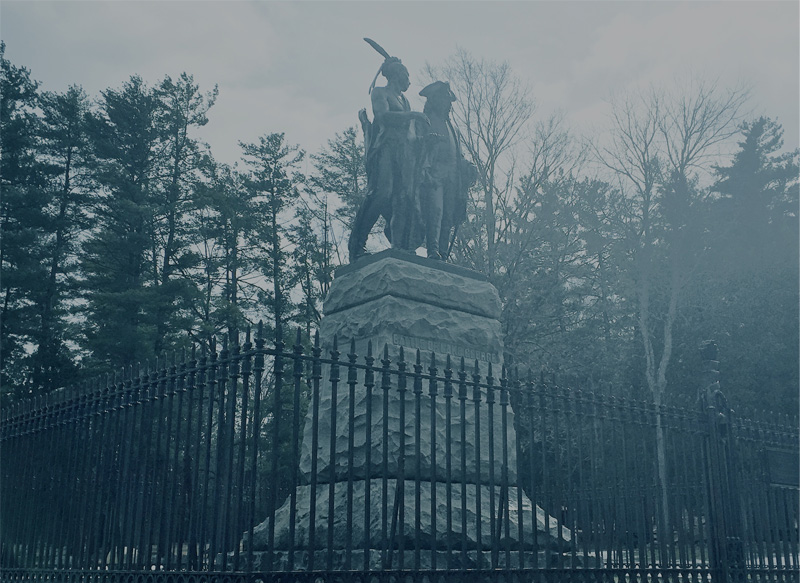 During the second engagement of the Battle of Lake George in 1755, many lives were lost. One such life was that of Nathaniel Edwards, a young soldier fighting under British Commander William Johnson. Edwards was shot three times by French forces before being flung into the lake and left for dead.

The approximate site where he drowned is in shallow water just across present-day Beach Road from Lake George Battlefield Park. Today, there is a historical marker identifying a “Submerged Track” that dates back to the 1900s, but it may as well also denote the site of Edwards’ 18th century death.

Legend has it that if one stands in ankle deep water at this site as the sun sets and shouts “You did not die in vain!” Nathaniel Edwards’ ghost will present itself, hovering just above the water, approximately 15 feet from the shore.

People have also reported their dogs acting strange at the site at dusk, offering further evidence that Edwards is still here more than 250 years after his death.

Try it for yourself next time you’re in Lake George, and maybe we can convince the Ghost Hunters to come back for another investigation…

If this works, let us know. Otherwise, April Fools!