Since 2005, Animal Planet has hosted the annual Puppy Bowl as counter-programming to the Super Bowl. The Puppy Bowl aims to entertain audiences and raise awareness of rescue and shelter dogs in the country. One of the stars of Puppy Bowl XI in 2015, Maddux, is now living in Lake George, and his story was recently featured in “People Magazine.” 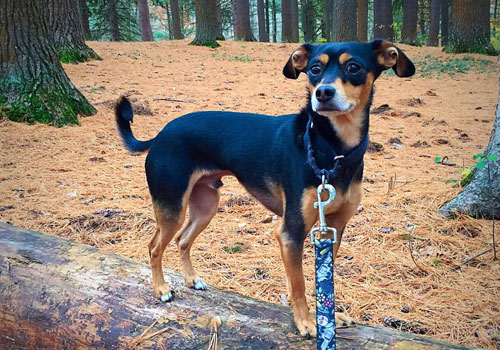 The story of how Maddux went from being a young rescue dog to a Puppy Bowl participant to living in Lake George begins with his owner, Michelle Maskaly of Lake George.

In a Post Star article, it was revealed that Maskaly’s connection to dogs started when she was just 9 years old. While at the hospital with pneumonia, she was given a small stuffed dog that brought her a sense of comfort.

Maskaly’s love for dogs stayed with her as she grew older, and in 2015, she found herself helping out the Florida Little Dog Rescue, which is a charitable organization that rehabilitates abandoned puppies. While assisting the organization in gathering together puppies for Puppy Bowl XI, Maskaly discovered a puppy named Bubba (now named Maddux).

Although all Puppy Bowl dogs are available for adoption, Maskaly originally didn’t plan on adopting one herself. However, when Maskaly first saw Maddux, there was no way she wouldn’t adopt him.

Maddux, along with other puppies ages 12 to 20 weeks old from rescues and shelters, competed in Puppy Bowl XI in events such as bringing a chew toy across the endzone. Just like the Super Bowl, there are penalties handed out for “paws interference” and “unnecessary ruff-ruff-ruffness.”

The Puppy Bowl isn’t just fun to watch. The event helps to promote the role of small shelters and rescue organizations in caring for abandoned pets, and it emphasizes adopting these animals.

Ever since Maskaly brought Maddux home, he has shown just what rescue dogs are capable of. Maddux has been trained to become a therapy dog so he can visit children’s hospitals and help cheer up the patients.

To highlight Maddux’s story from Puppy Bowl star to local therapy dog, “People Magazine” recently featured him in an article that looked back on past pooch players at the Puppy Bowl.

Although Maddux is an Animal Planet star with an unforgettable face, he is now at home in Lake George where he enjoys going to dog-friendly restaurants and exploring the area with his owner Maskaly.