One of the world’s most accomplished Elvis Tribute Artists is bringing his national tour to the LakeGeorge.com Elvis Festival on June 2, and it is sure to be one of the five-day festival’s many highlights! 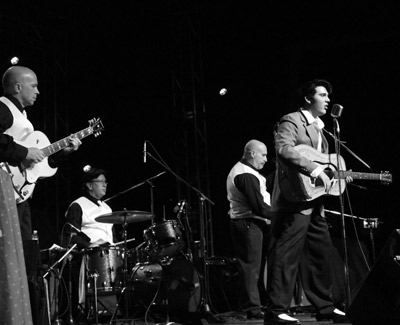 60 years ago, Elvis transitioned from a regional sensation to an international phenomenon. His 1956 tour through the south secured his power to draw larger audiences more than any other touring performer in the music industry.

In honor of this historic milestone, Elvis entertainer Cody Ray Slaughter will perform throughout North America in the touring production “Elvis ’56.” At only 24, Slaughter is considered be one of the most accomplished Elvis Tribute Artists in the world, having performed as Elvis in the Tony Award-winning production of Million Dollar Quartet.
Slaughter was also the youngest person to be named the Ultimate Elvis Tribute Artist by Graceland, which is the industry’s absolute highest honor. He’s one of less than half a dozen tribute acts to appear on Late Night with David Letterman, performing on the same stage Elvis performed on during his appearance on the Ed Sullivan Show.
This show is different from those performed in the past, though, as Slaughter will not be actually impersonating Elvis.
“It’s not a first person portrayal of Elvis,” Slaughter said in a statement. “I don’t try to make it look like I’m putting on Elvis; I’ve been an Elvis fan for so long that it just comes naturally. It’s something that just kind of happens.”
“We call it a biopic concert for just that reason,” Jason Sherry, the show’s producer, adds in a statement. “It’s a concert about Elvis, and will appeal to Elvis fans, but the star of the show is Cody and we want his talent to show through. . .I’ve never seen any entertainer that captures Elvis’ musical style better, while allowing his own personality and personal charisma to show through.”
Slaughter is accompanied by a 1956 authentic rockabilly band called the Hillbilly Katz. Drummer David Fontana, the son of Elvis’ Rock and Roll Hall of Fame drummer DJ Fontana, leads the four-piece band. A comedic song and dance act with a 1956 feel opens the show.
While Slaughter is a prime highlight at this year’s Elvis Festival, there is a full lineup of other amazing, Elvis-filled events, including performances by:
For a full schedule, ticket information, and all the details you need for this amazing five-day event, check out our Elvis Festival Guide, or call 1.888.406.5885.