Late last week, heavy machinery rolled up to Surfside on the Lake, one of Canada Street’s iconic hotels. It took less than two days for approximately half of the property’s front building to be demolished, an endeavor that, when complete, will make way for a new and improved lodging experience. 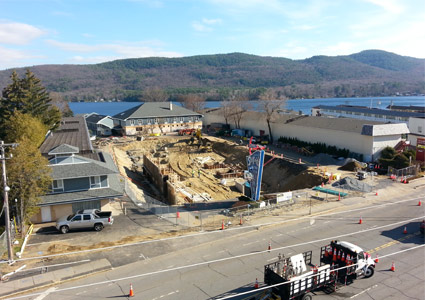 Surfside owner Salim Amersi has made a significant investment in his property, and will be replacing the front building with a brand new structure and underground parking garage. 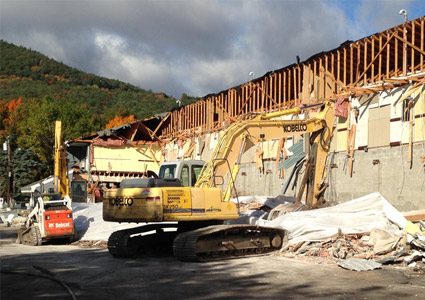 Photo provided
Although the building’s capacity will stay the same at 50 rooms, the new ones will be much larger and more luxurious than the old ones, and there will also be 10 two-bedroom suites. Large private balconies are planned for all 50 rooms. Additionally, the new building will contain two new conference and meeting rooms, plus the Surfside’s lobby, front desk, and administration offices.

Photo provided
Amersi has an aggressive timeline planned for his project, and, according to The Post Star, hopes to have the steel structure up by the end of December, with May as a target for the building’s grand opening.
The Post Star also reports that the iconic Surfside sign, which dates back to the business’s opening in the 1940’s, was the inspiration for architect Dan Neary’s contemporary design for the new building. Those interested can track the project’s progress and see renderings of the new building on the hotel’s website and Facebook page.
Sources: