Local entrepreneurs Russell Radigan and Justin Petley identified an underserved market in the area and have begun their first business venture together to meet the demand. The pair recently opened R & P Hookah & Tea on Canada Street in Lake George Village and has big plans for the unique outlet! 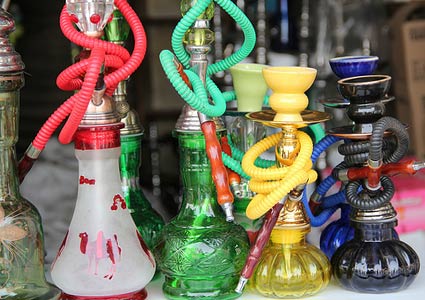 Although they are not readily found in our region, hookah bars are popular in major cities and are seen as social destinations where patrons can relax with friends. Hookahs are a Persian device “for inhaling vapor or smoke from flavored tobacco called ‘shisha,'” and their use is believed to “have a calming effect on the body and mind,” Denton Publications reports.

Radigan and Petley see their new business as targeting an age group that is not yet old enough to frequent the bar scene, but too young to want to spend an entire week’s vacation tagging along with their parents. For $20, R & P clients can rent a two-person hookah, with a menu of more than 40 shisha flavors changing every 2 weeks.

In addition, R & P offers more than a dozen herbal teas and Saratoga Coffee Traders’ line, so patrons can enjoy soothing hot beverages while they relax. Radigan and Petley are “entertaining the idea of applying for a liquor license,” according to Denton Publications, but no definite plans have been made yet.

Stop by and experience R & P Hookah & Tea for yourself! The business is located in the Mayard Center on Canada Street.