Just west of Million Dollar Beach on Beach Road is “Dog Beach” – a stretch of shore owned by the state that has been a haven for dog owners and their four-legged friends for years. As a result of “increasing concerns about garbage, revelry, and swimming with no lifeguard in that area,” though, The Post Star reported yesterday that the DEC is considering transforming Dog Beach into something much less dog-friendly. 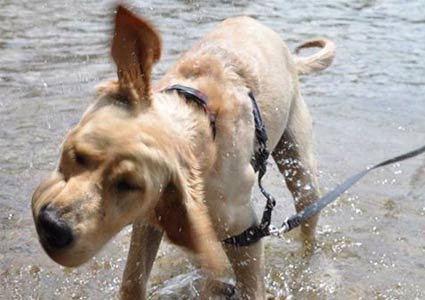 Lisa Giknis, owner of The Dog Cabin on Montcalm Street and the adoptive parent of Dog Beach in past years, told The Post Star that the DEC is proposing to build “a seawall that would be at a height people could fish off, and to convert the sandy part [of the beach] into a grassy park.” The catch? No dogs would be allowed in this area.

Outraged by the potential fate of Dog Beach, Giknis started an online petition and found herself with more than 400 supporters in 24 hours. She believes that not only would closing Dog Beach be a blow for locals, but that tourist revenue could be lost as a result of people seeking out more dog-friendly vacation destinations.
From 2012-2014, Giknis officially adopted Dog Beach, which meant that in exchange for buying a permit, she would be allowed to put up signs and waste stations identifying the beach as dog-friendly. Although she chose not to renew her permit this year, Giknis is still actively involved in cleaning up the beach. She is quick to point out that the primary pollutants she finds during her clean ups are not dog waste, but trash left behind by two-legged beach goers.
In opposition to the DEC’s plan, Giknis has her own idea about what should be done with the beach. She told The Post Star that she has “proposed that the area be fenced in and a staff member placed there. Only people with dogs would be allowed in. To offset the cost, charge tourists $1/hour,” with Lake George property owners allowed in free.
Since Dog Beach lies within the Town of Lake George, The Post Star has reported that Supervisor Dennis Dickinson “is exploring options with the DEC.” Will pups still have a place where they can frolic in the water on hot summer days? Or will the DEC’s bite prove to be as bad as its bark?
Source:
The Post Star