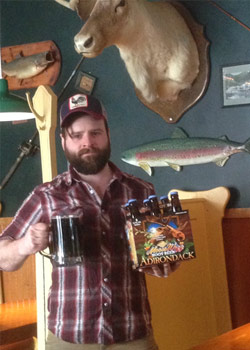 Yes, a moose. Who would’ve thought that one of the most iconic and revered animals in the region could be the subject of litigation between two brewing companies?!

Apparently, Moosehead Breweries Limited, a Canadian brewery, has a legal claim on the “word ‘moose’ and the profile or silhouette of the head of the beast itself,” according to The Post Star. Moosehead is bringing a lawsuit against Adirondack Brewery because of the latter’s use of “moose” and the animal’s likeness on packaging and labels of its Moose Wizz root beer, shown in the image to the left with Adirondack Brewery’s Lead Cellarman, Philly Hartman.

This is not Moosehead’s first attempt at protecting its “property”. The brewery initiated a lawsuit in 1995 against Montana’s Big Sky Brewing. It took a whopping nine years to resolve the battle over Big Sky’s “Moose Drool” beer, which now cannot be sold in certain states.

Will Moose Wizz’s fate be the same as Moose Drool’s? Adirondack Brewery founder John Carr doesn’t think so. His twitter campaign, #freethemoose, is an effort to get the public involved in the great moose debate. The Post Star reports that Carr’s ultimate goal is to get Moosehead to drop the lawsuit, saying “The moose is a free animal, and it roams the woods free, and it existed longer than the (Moosehead) brewery existed.” Carr’s initial attempts to reach a compromise with Moosehead were rejected.

As breweries rise in popularity, so too do brewery-related lawsuits. Names of different brews, fonts on labels and packages, and taglines are just a few of the features breweries have been battling over. Carr was quick to point out, though, that Moosehead’s “property” is ‘for beer’, and while Adirondack Brewery is a producer of beer, Moose Wizz itself is actually a soft drink.

Only time will decide the fate of the moose and Moose Wizz. The timeline for any legal proceedings is currently unknown.

What do you think about the moose battle? Let us know in the comments below, or join the #freethemoose campaign on Twitter!