Want to take a break from this non-stop heatwave with some live entertainment? The Lake George Dinner Theatre is now open and ready to give you a great meal and some rest from the humidity. 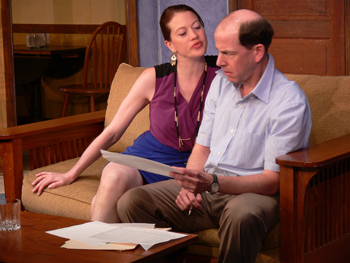 The theatre kicked off their opening play with Norm Foster’s comedy THE LOVE LIST, last Thursday, July 12th.
“We’re anticipating a good season this summer.  Lake George Village had strong Memorial Day and July 4th  holiday activity and the Adirondack Theatre Festival, with whom we collaborate in various production areas, is seeing its box office numbers increase over 2011.  And so far the audience response to THE LOVE LIST has been very enthusiastic,” said Terry Rabin, Producing Artistic Director of LGDT.
Foster’s play follows Bill and Leon who fill out a matchmaking list of the ten qualities they’d like to find in a female companion, a list they got from a mysterious gypsy.  When a woman possessing all of the qualities on the list suddenly appears at Bill’s door and seems to know his deepest secrets, the men are off on a hysterical mission to figure out who she is.
The LGDT is running for the 45th season and this season runs through October 20th with dinner performances scheduled for every Wednesday through Saturday. Matinee luncheon performances will be held every Tuesday, Wednesday, Thursday and select Saturdays.
For tickets and more information check out the Lake George Dinner Theatre’s website.