Last Saturday the Lake George Expedition Park, including the new Dino Roar Valley and revamped Magic Forest, had its grand opening and I was lucky enough to attend with my small family. It was my husband’s 35th birthday and this is the celebratory activity he chose – we also have a young son who is two, so it was fitting for the whole family.

Here’s how our adventure went, and what you can expect when bringing your kids to this unique park!

Lake George Expedition Park has pricing options that allow you to visit Dino Roar Valley, Magic Forest, or both, and we opted to enjoy the entire park. The park is easy to see from the road and there’s plenty of parking. Employees were on hand to help us out on where to go, and because we got tickets online ahead of time we were able to skip the line.

As we made our way through the Dino Roar Valley entrance there was a dilophasaurus waiting to greet us. This is the first dinosaur you see, and it makes for a perfect photo op to start the day off. The dinosaur moves, shakes his head, and growls! There’s also a Dino Roar Valley map so you can get an idea of where you’re going – it’s basically a big loop, so it’s easy to follow. 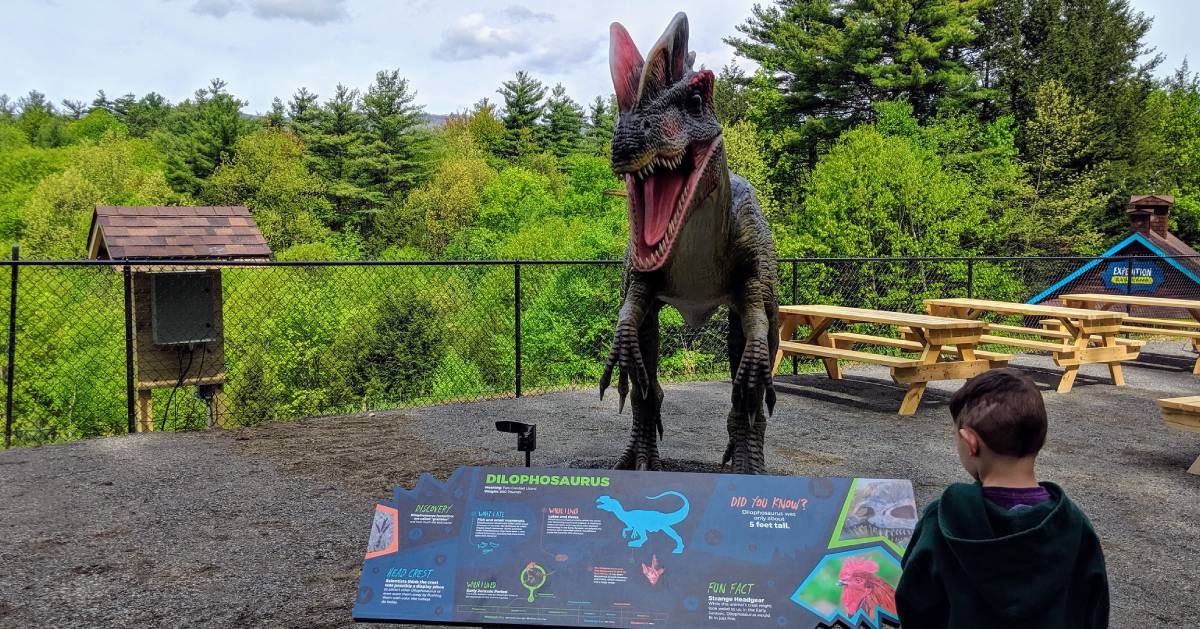 Behind the dilophasaurus is a large white tent with a series of televisions set up at high so visitors can watch a quick video on what to expect at the park. They ask guests not to pet the dinosaurs, which was not a problem for my son – many kids were excited to run right up to the beasts, but my little guy is just two, and preferred to wave at them from a distance. 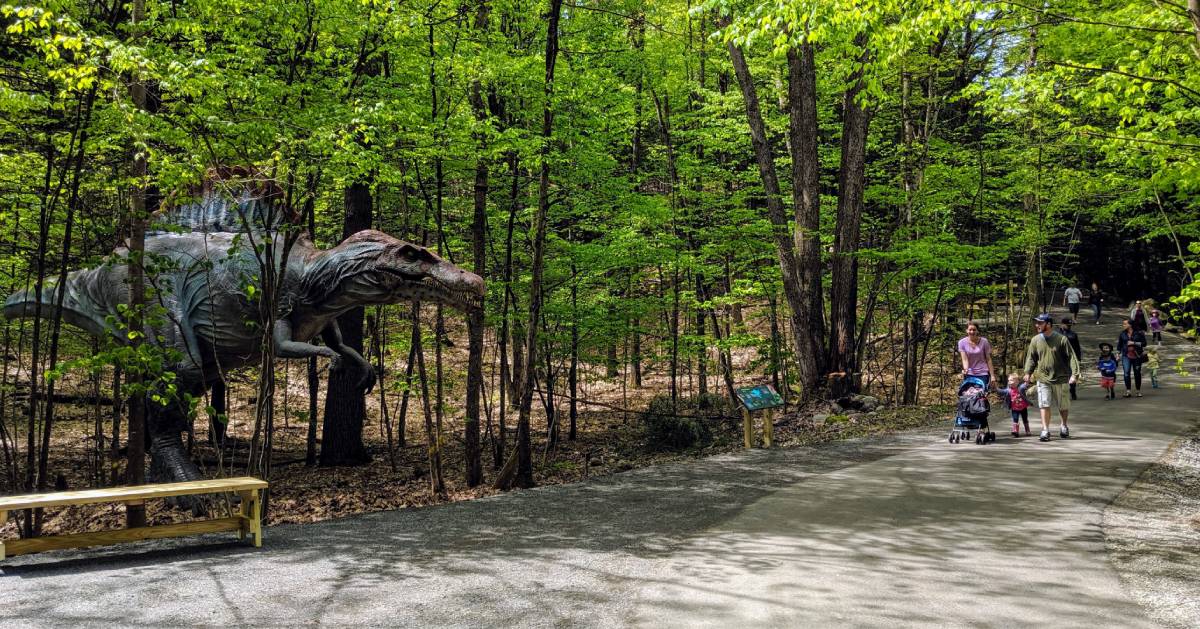 From there, you make your way through a lush park with a wide, paved walkway and tall trees. It would be an enjoyable walk even if there weren’t dinosaurs! And, bonus: there’s plenty of shade from the trees which undoubtedly comes in handy on hot, sunny days. 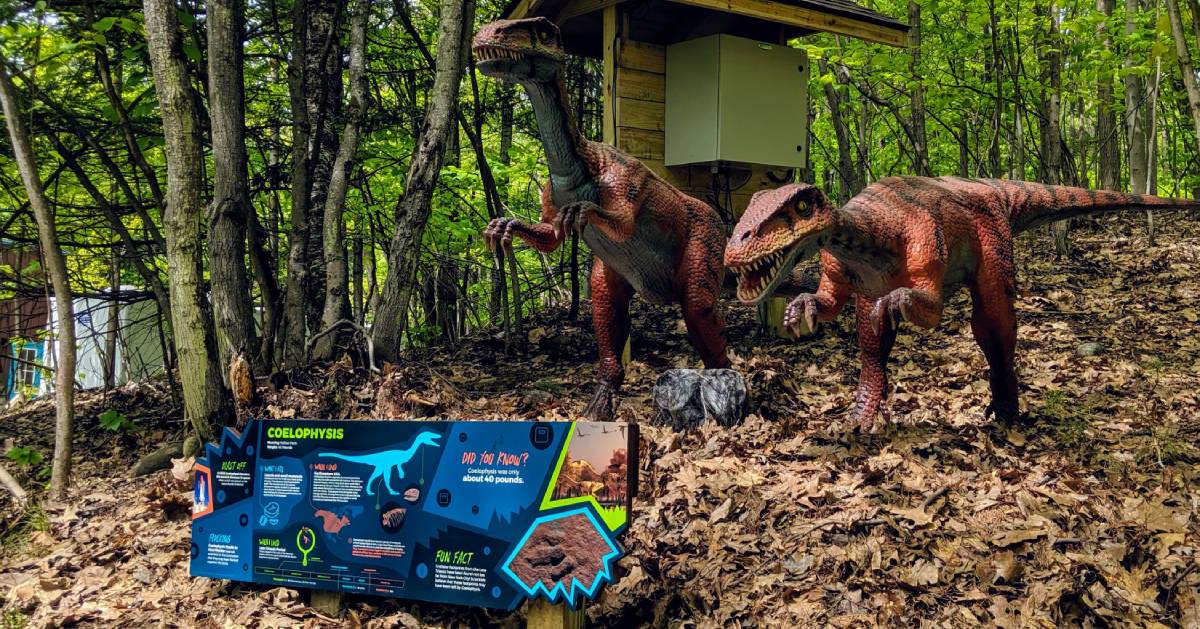 Walking through these woods is like journeying through Jurassic Park. The life-size dinosaurs are at every turn, and you can hear them growling and moaning before you get up close. Each creature has signage in front of it explaining what kind of dinosaur it is and a bit about them, much like you’d see at a zoo. 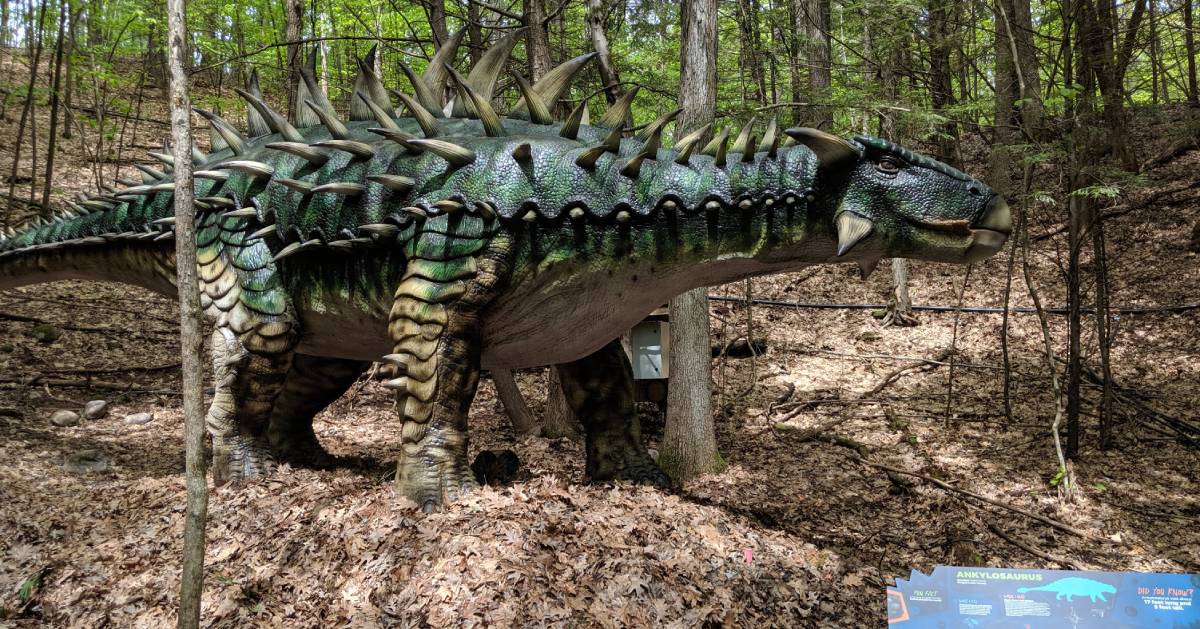 We checked out the Fossil Dig site, which consists of two white tents over sandy areas where kids of all ages can dig for fossils. This is a free activity, and they provide shovels, brushes, and tools to help you with your discovery. But be forewarned, the fossils are deep in there – they make you work for it! 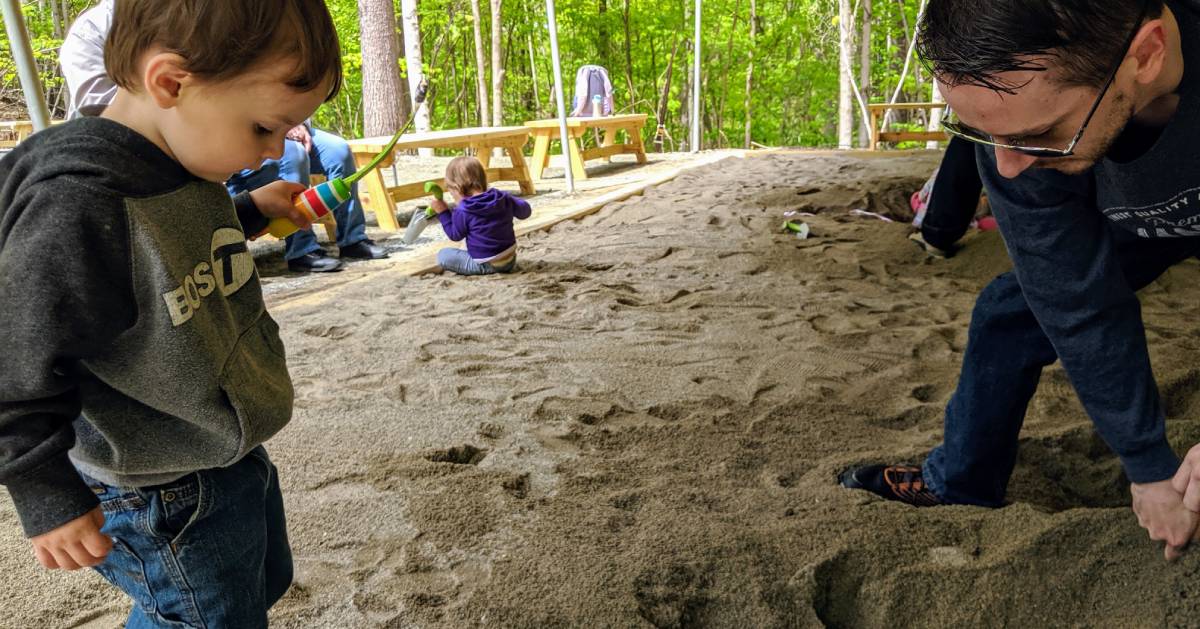 Perhaps the most impressive dinosaur we saw at the park is one of the last beasts you see before you leave, the titanosaurus. This was one of the largest dinosaurs ever discovered. It’s almost impossible to get a photo with this guy with all of him in the picture! My husband loved how you could see the sides of him moving as he “breathed” in and out. 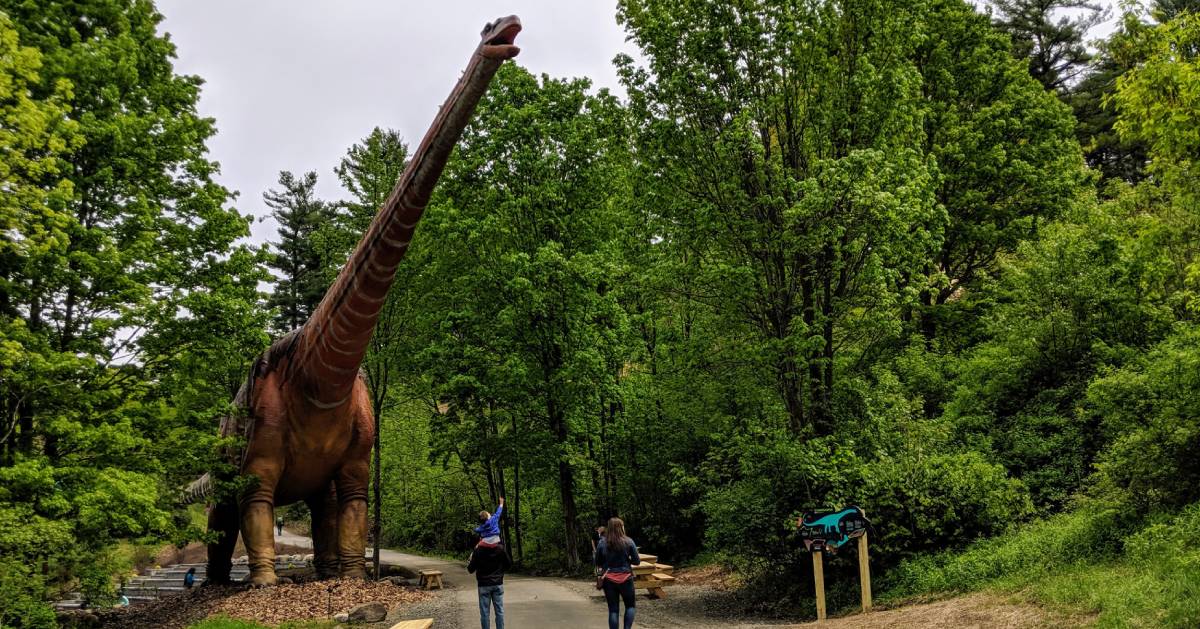 From Dino Roar Valley we made our way over to Magic Forest. If you grew up in the Lake George area like my husband did, Magic Forest was likely a significant part of your childhood. But even if you’re seeing it for the first time, you can really feel that kitschy, Lake George vibe. 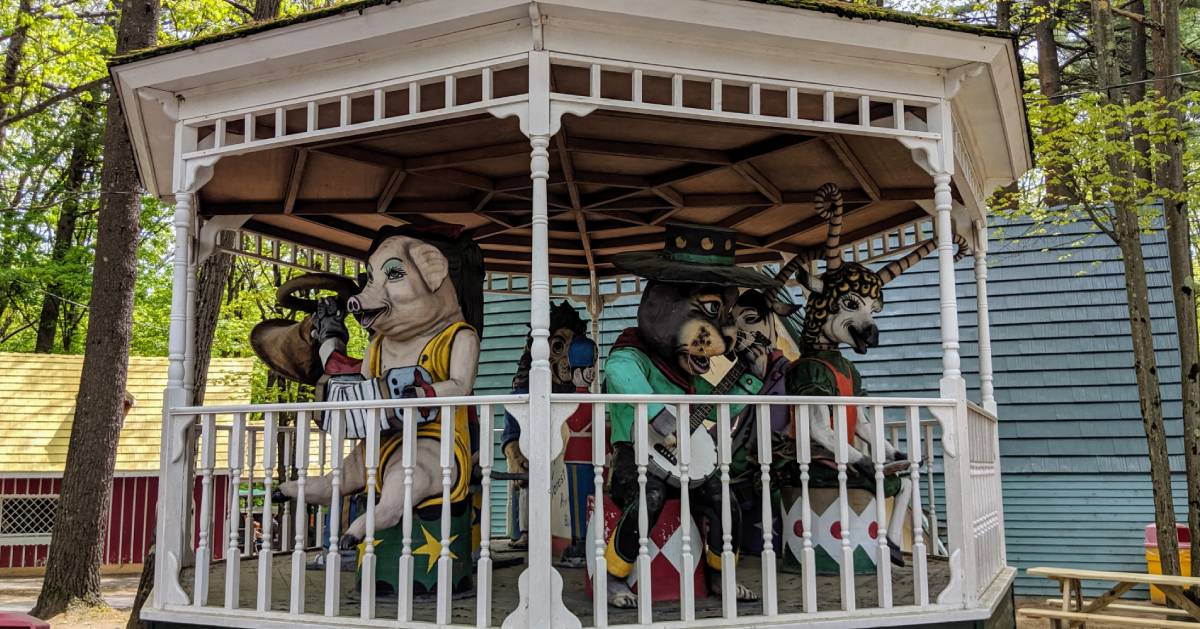 They’ve kept many of the statues and decor around the park, such as the Snow White exhibit, which includes several displays within a small hut. Signage informs guests Disney made this exhibit in 1939 for the New York World’s Fair and the animation is one-of-a-kind. 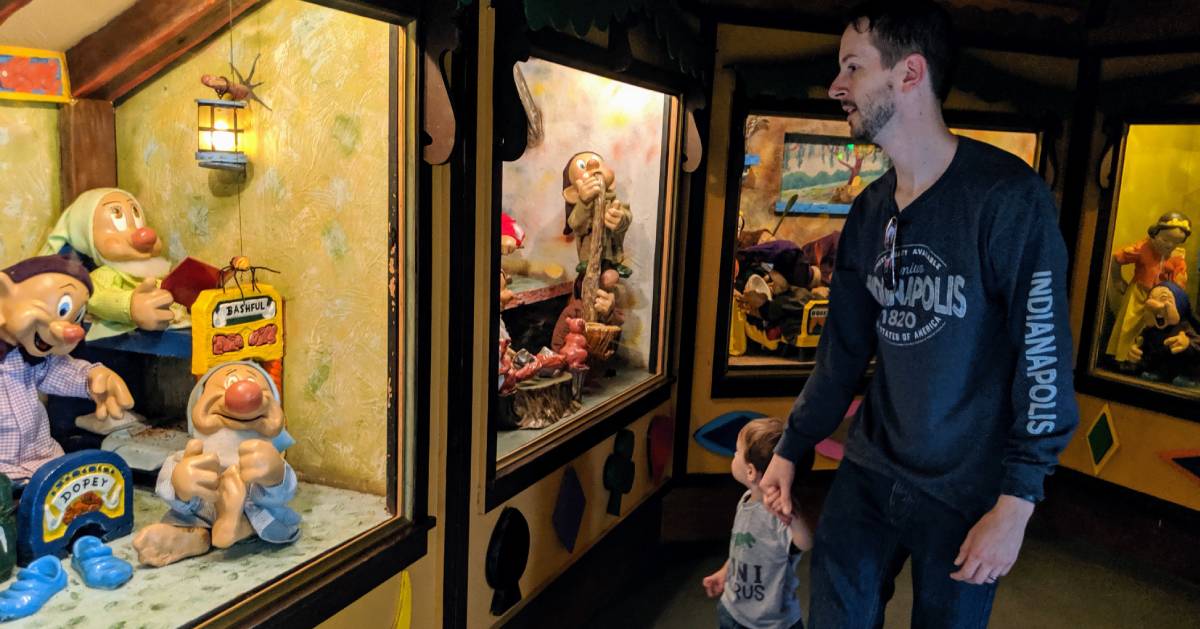 While the displays look like they haven’t changed in decades, the park has upgraded the rides to ensure safety for the guests. There’s a small Ferris wheel, a merry-go-round, a tilt-a-whirl, a paratrooper ride (also known as the parachute ride or umbrella ride), and much more. 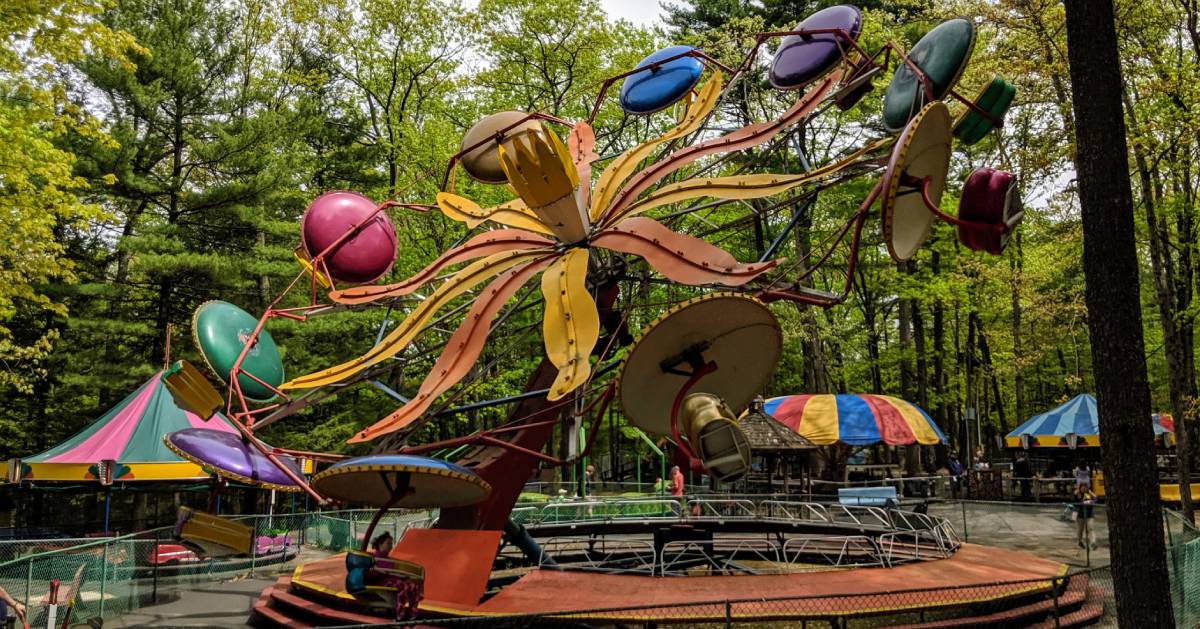 We loved that they had rides for the littler kids as well, such as small boats with bells they can ring, and little cars that go around in a circle. Like many little boys, my toddler is obsessed with cars, so he was in his element! This was the first time we got to put him on a ride all by himself, so it was a special memory to take home. 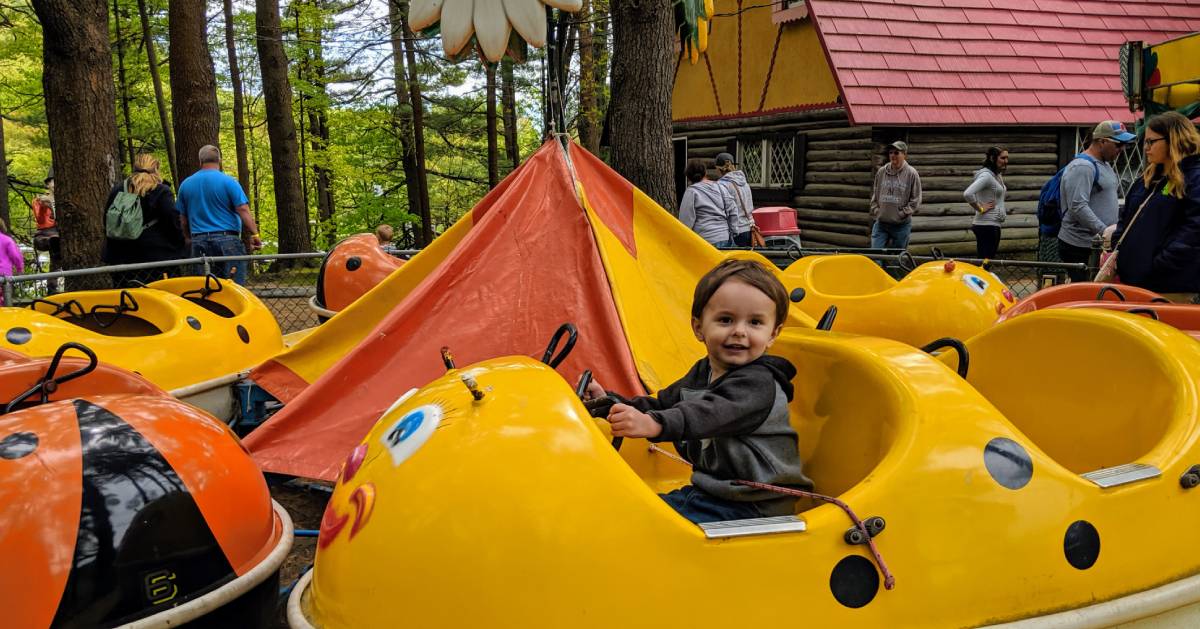 Before leaving Magic Forest we grabbed some lunch at the Peppermint Lounge. They offer inexpensive items you’d expect from a theme park, like hamburgers, hot dogs, fries, and they even have cotton candy.

My son got a kick out of his chicken nuggets being shaped like dinosaurs. I had a cheeseburger, which really hit the spot. They have a sign inside the building where you purchase the food indicating that they do not pre-cook the burgers, so you can have a flavorful meal without a hefty price tag. There was plenty of room to eat outside among picnic tables. 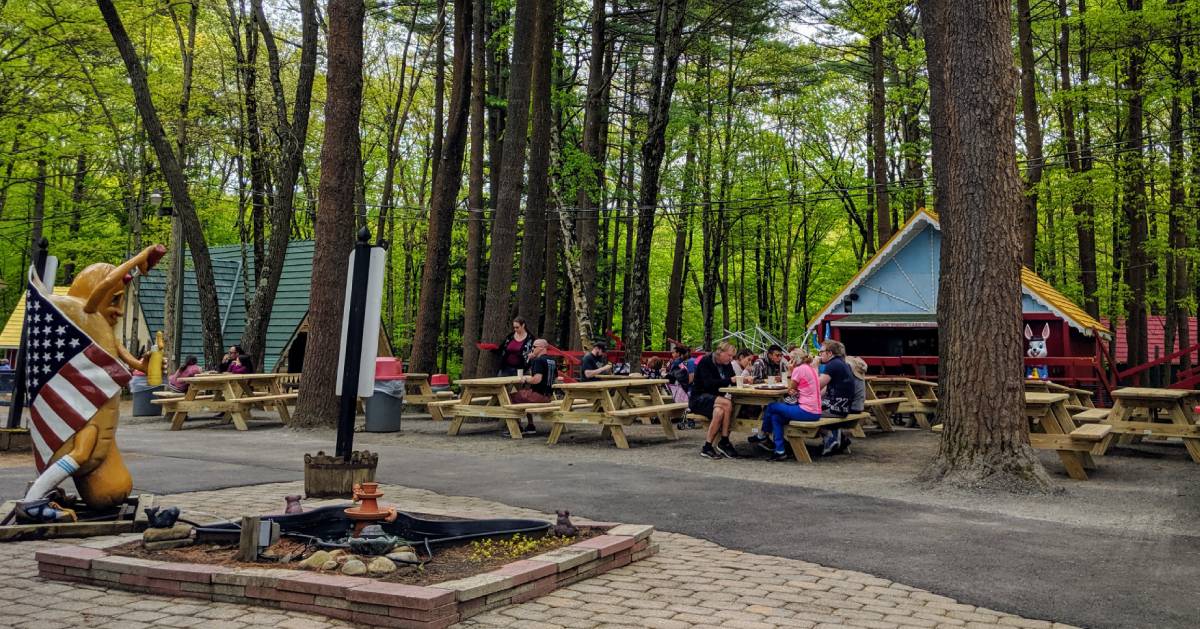 After lunch, we enjoyed two more activities before calling it a day – we took a five-minute train ride and fed some farm animals. The train goes through the woods where you see a lot of animal figurines, go over a bridge, and make your way through a tunnel. 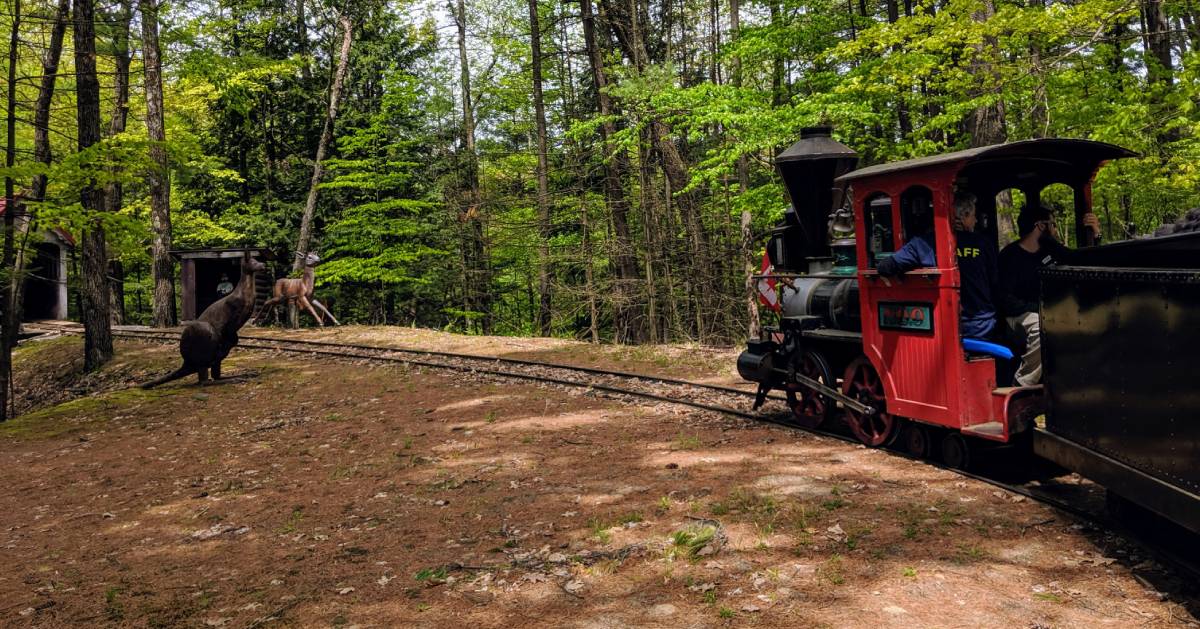 My son loves trains possibly more than cars, so this was an ideal activity for him. And of course he likes animals – as all kids do! – so the train ride and animal feeding were fun, unexpected additions to the Magic Forest experience.

Alpacas hang out near where you board the train, and sheep and goats are a little ways away. We purchased a generously filled paper cup of food to feed the animals for just $1. 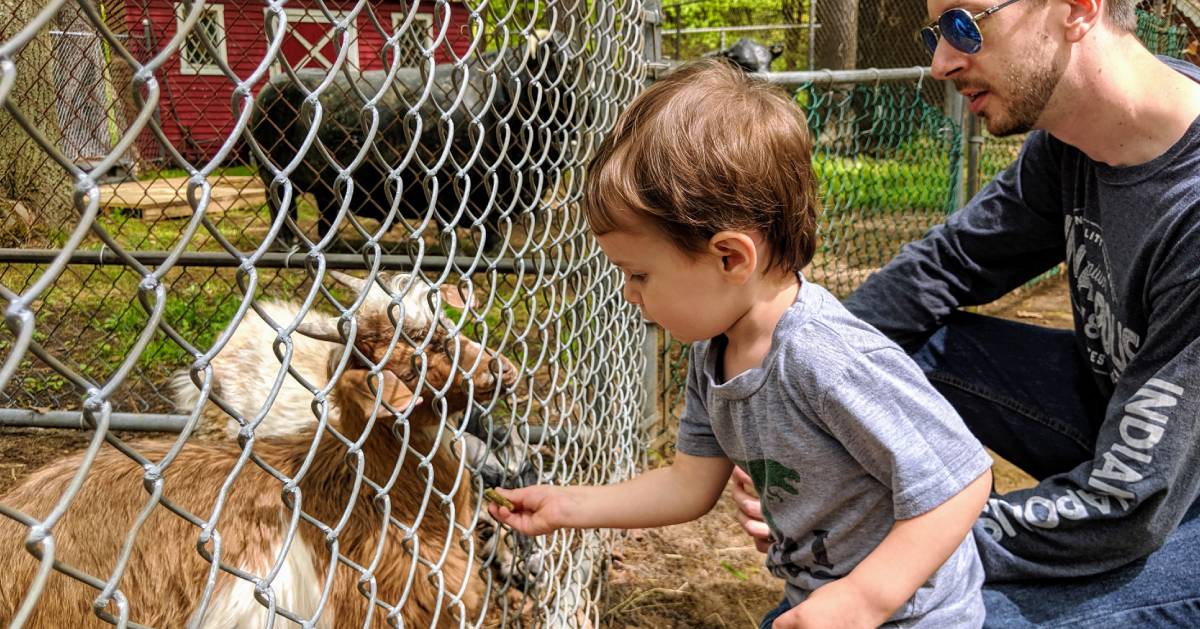 One of my biggest takeaways on Lake George Expedition Park is that it’s the ideal size. Both Dino Roar Valley and Magic Forest are large enough that there’s plenty to do and see, but they’re not so big they’re overwhelming. My two-year-old could walk around the entire time with no problem. Although the park is definitely stroller-friendly, it’s nice to leave that at home when you can.

The other aspect I really loved about the park, aside from how it’s so kid-friendly for all ages, is that it marries the old and the new with the two components. You can tell the realistic dinosaurs at Dino Roar Valley come from the latest technology, but then Magic Forest gives you that sentimental feel of parks you visited when you were a child.

It’s safe to say we’ll look forward to coming back! Since being back at home after the adventure, my son now says “no dinosaurs” when we’re taking a walk, or looking out of a window, as if he’s expecting the giant beasts to come strolling up at any moment. Even at such a young age the park made a distinct impression on him, and we look forward to making more memories.