Want to make the most of this long holiday weekend? Plan a last-minute trip to the shores of Lake George! Summer’s not over yet, and this weekend there will be tons of outstanding events happening in Lake George, including fireworks cruises, a two-day music festival, and more. 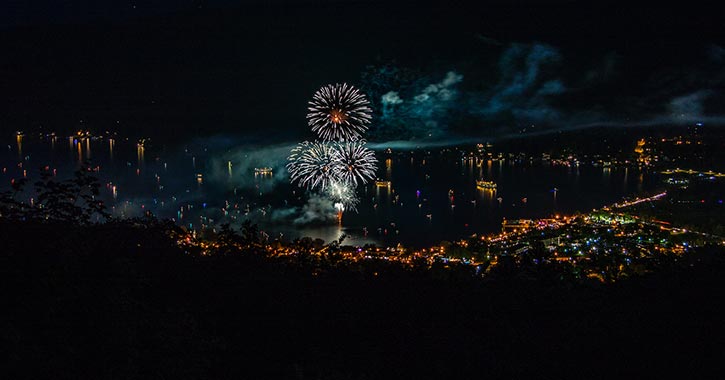 Cruise to the Ooohs & Aaaahs

In celebration of Labor Day weekend, the Lake George Steamboat Company will host two fantastic fireworks cruises on Saturday night. Buy your tickets for a cruise on board the Lac du Saint Sacrement or the Minne Ha Ha, and then watch as fireworks are launched over the lake!

Get Your Groove On

Take a walk over to Shepard Park in Lake George Village and listen to live music by the Funky Dawgz Brass Band and Banooba on Friday night. The free outdoor concert will also include a craft beer & wine garden and kids’ activities.

Hamiltunes – An American Singalong at The Park Theater – Friday, August 31

On Friday at 7:30pm, The Park Theater in Glens Falls will present Hamiltunes, a singalong show featuring tunes from the acclaimed “Hamilton.” Some of the area’s best talent will come together to sing the character “roles” in front of a live audience.

The Adirondack Independence Music Festival will return to the Festival Commons at Charles R. Wood Park this weekend. A huge lineup of bands and musicians will take the stage, including Keller Williams, Badfish, Let’s Be Leonard, Pigeons Playing Ping Pong, and many more!

Although the Adirondack Independence Music Festival officially ends on Sunday, there will be a free beach party on Labor Day at Shepard Park. Stop by during the afternoon for live music with Shu, Hartley’s Encore, and Rich Ortiz.

Have a Good Laugh

The final performances of The Lake Theatre’s production of Jerry Finnegan’s Sister will be held this week at the Holiday Inn Resort. Enjoy dinner and a hilarious play during one of the upcoming showtimes in Lake George.

Looking to have some fun with the family? Plan a trip to North Creek during Gore Mountain’s Family Savings Weekend! On both Saturday and Sunday, all kids ages 19 and under can enjoy unlimited activities for just $20pp, per day. There are climbing structures, mini golf, bounce inflatables, and more.

Try some delicious craft beverages throughout the region >>