History buffs and nature lovers will soon have a new destination in Lake George. The village’s historic Battlefield Park has plans for a brand-new visitors center to open by Memorial Day 2019. 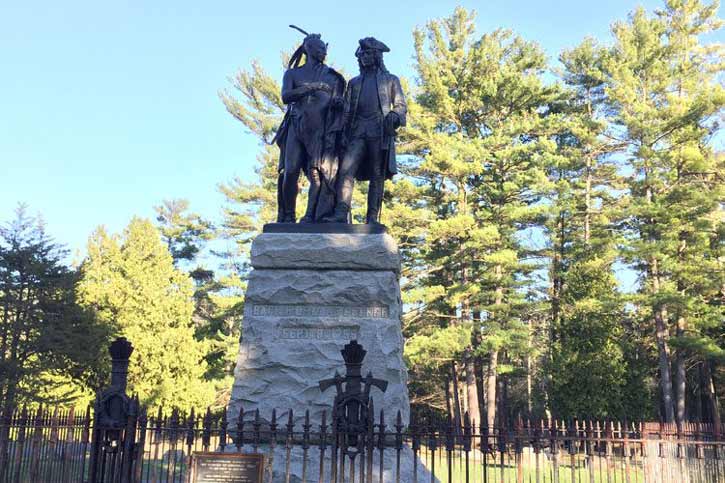 Battlefield Park, located on Beach Road, is a popular outdoor spot for residents and visitors of Lake George. The sweeping views of Lake George create a picturesque setting for joggers, birdwatchers, picnickers, and families to enjoy the trails and landscapes of the 35-acre park in any season.

But it’s the history of the park that sets it apart as a cultural, educational, and historical site of importance. Battlefield Park earned its name by being the site of two battles in the French and Indian War, and monuments throughout the park point to this troubled past.

Park guests may notice three statues placed on the grounds of Battlefield Park. One statue, a Native American man dipping his hand into a pool of water, is dedicated to the various Native American tribes in the region. A second statue, of the Mohawk chief King Hendrick, was erected in the late 1890s by the Society of Colonial Wars in the State of New York. The third statue depicts Father Isaac Jogues, the first white man to view Lake George, who was martyred by members of a Mohawk tribe in 1646.

These statues give visitors a sense of the park’s history, but the new visitors center will allow for more in-depth educational outreach to park guests.

In 2018, $700,000 from the Environmental Protection Fund has been devoted to the construction of a new building for the Lake George Park Commission. This new structure, expected to be completed by November, will replace the current offices of the commission, located at 75 Fort George Road.

The Lake George Battlefield Park (Fort George) Alliance, a nonprofit friends organization of the park, plans to use the bottom floor of this new building as the new Battlefield Park Visitors Center. This center will provide a home for the Alliance, which hosts interpretive walks and battle reenactments at the park.

This new visitors center would also house historical artifacts, diaries, and educational materials about the history of the park. Artifact displays and interactive exhibits would provide an engaging and educational experience for visitors to the park.

Lyn Karig Hohmann, president of the Lake George Battlefield Park Alliance, told the Post-Star that the Alliance plans to include the community in fundraising and planning activities for the new visitors center, which she hopes would be open to the public by Memorial Day 2019.

The Alliance estimates that $100,000 will be needed to design and build the displays and exhibits for the visitors center. A planning meeting, at which community members can offer ideas for the center, is planned for September.

To learn more about the Lake George Battlefield Park Alliance and its plans for a new visitors center, visit the Alliance’s Facebook page.